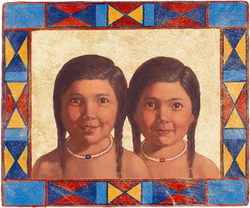 Wing Feather and Sparrow are the younger twin brothers of Kaya'aton'my.

They often get into trouble, although the blame usually falls on Kaya. They are mischievous and are four winters old.

When raiders invade the camp, the two are picked up by Brown Deer and Eetsa as they run into the woods.

Kaya comments that Light On The Water was easy to care for, unlike her little brothers. Kaya points out the two boys hiding in the woods and calls out for them to go riding. The two eagerly step out and ride with Kaya and Brown Deer to the canyon, where they play with the rest of the kids while the women gathered firewood.

The twins take part in the New Year Gathering with the rest of the family, listening closely to the songs and stories.

The twins watch Kaya make three horses out of pine, and Wing Feather asks if one of them was for him. Sparrow states if his brother gets a toy, then he should get one too. Kaya says each boy would get a toy, tapping Wing Feather on the nose and tugging Sparrow's braid. When Kaya hands the boys their toy horses, they thank Kaya in unison and scamper to where the rest of the children were playing.

Kaya and the Beavers

Retrieved from "https://americangirl.fandom.com/wiki/Wing_Feather_and_Sparrow?oldid=80709"
Community content is available under CC-BY-SA unless otherwise noted.