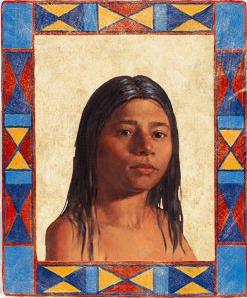 Two Hawks is a Salish boy who was a captive with Kaya'aton'my.

Two Hawks is from the Salish tribe around North of where Kaya's people live. He was a slave captive who escaped with Kaya from their enemies, after Kaya and Speaking Rain were kidnapped in Kaya's Escape. Two Hawks was described as sullen and angry. He is very stubborn, and quick to anger. He can be very obstinate. He is strong-willed, has a strong personality, and wants to be a strong warrior when he gets older. Throughout Kaya's Escape, he showed himself to be ashamed to be doing the work of "women" that he was forced to do as a captive, and so was determined to act more "masculine." Kaya introduced him to Jumps Back, who taught Two Hawks how to make and play the flute. At first Two Hawks wasn't any good, but by Kaya Shows the Way he had learned a song. He became less obstinate as he got used to Kaya's village, but he often followed the boys around teasing her.

He promised to find Kaya's sister for her because she helped him reunite with his family.

Two Hawks is the only figure in the enemy camp who wasn't happy about the raider's return. Kaya realizes the dirty, sullen faced boy must be a slave as well, and she and Speaking Rain would soon look as tired and bitter as him. Two Hawks is usually seen tending to the campfire.

Two Hawks was sent into the thickets to gather firewood with Kaya and Speaking Rain, but whenever Kaya approached him, he would frown and turn away. Kaya assumes he must be ashamed to be doing women's work. Later the day, after Kaya scraped the hides, Two Hawks motions Kaya over and asks if she understood sign language. He asks Kaya's tribe, and signals he was Salish. The two begin to talk whenever Kaya went to his position by the campfire, and he gives his name to her. Two Hawks tells how he was captured in a raid on his village, and he didn't know where his family was or if they were alive. When Kaya tells him her plan to escape and invites him along, he agrees to go with her. Two Hawks is insistent that they leave right away despite Kaya's protests, explaining that he knew some of the enemy's language, and heard their plans to move further east once they traded their hides and horses.

The two manage to escape and avoid being found by the enemy scouts. When Kaya calculates the way west and signals for Two Hawks to follow her, he initially refuses, but follows her as soon as she begins to walk away. When Kaya builds a lean-to for shelter and asks for Two Hawk's help, he states he refuses to do the work of women anymore and would keep a look out instead. When Kaya tries to take the lead again to the river where they could catch fish, Two Hawks glowered at her as he signed that men lead and women follow, and Kaya should follow him.

When Kaya begins to waver from exhaustion and hunger, Two Hawks refuses to take a break and pushes her onwards. Kaya finds the strength to push onwards by thinking if a skinny boy like Two Hawks could go on, she could too. When they reach the stream and Kaya says they should rest and fish tomorrow, Two Hawks tells Kaya to stop telling him what to do. He state his dad was a warrior, and he would become a warrior one day too. The two break into an argument, and Two Hawks says he wasn't anyone's slave anymore, and he would do as a choose before running off on his own.

Two Hawks is getting a drink from the stream when Kaya warns him about the cougar. Two Hawks is attacked, but the hide he wore and Kaya's quick actions save him from any deep wounds. Two Hawks is humbled by the experience, agreeing with Kaya that they weren't enemies, that they should work together, and makes a point to say that Kaya did a good thing out loud. The two work together from here on out, and Two Hawks helps with both building fires and making shelters.

On the BitterRoot Mountain, Two Hawks spots a prairie in the distance and Kaya recognizes it as the place where her tribe sometimes dug for bulbs. Two Hawks climbs a tree to get a better view, but falls off the tree and breaks his ankle. Despite his great pain and cold, he refuses to cry. When Two Hawks is still unable to put his weight on his ankle the next day, Kaya leaves him at the shelter with some food, planning to return to him with someone from her village to help him.

Two Hawks is still recovering from his broken ankle, and he often sat alone and homesick all day. He still didn't understand a lot of the language spoken around him, and some days he would sit all day by one of the lodges without moving. Swan Circling notes he looked lonesome and grumpy, and Kaya comments it was because he didn't like to be patient.

The following day after her talk with Swan Circling, Kaya tries to persuade Two Hawks to go riding. He stubbornly refuses, having quickly learned the word for 'no' in Kaya's language, and tells her to leave him alone. Two Hawks keeps on insisting he couldn't ride because of his broken ankle, but Kaya keeps insisting he could do it if she helped him. Two Hawks initially shook his head when Kaya put her hands out to help him onto the horse, and Kaya wonders if he thought she wasn't strong enough to lift him. Two Hawks ultimately gets lifted onto the horse, and Kaya notes instead of grimacing in pain, he actually looked pleased, and takes him to go find an elderberry stick to make a flute with.

A few days later Two Hawks is seen with an older boy Runs Home, who was helping him with his flute. When Runs Home points out the mistakes in Two Hawk's flute, he shoves the flute out of sight and gives Kaya a fierce look of anger and disappointment. Despite looking much healthier, in that moment he looked like the skinny, bitter boy she had first seen at the camp. Kaya thinks how if his ankle was healed and could run away from them, he would. Kaya reminds Two Hawks that he couldn't make something perfect on his first try, and both she and Runs Home offer their help to find another stick to make a flute from. Two Hawks shrugs, but he follows Kaya right at her heels, as if relieved she and Runs Home hadn't let him quit on his first try.

Two Hawks is present at the New Years Gathering and, unable to understand the words, gazed steadily at the others as though he understood everything from their serious expressions. After Swan Circling's death, Kaya mistakes Two Hawk's flute notes for a bird song. While Two Hawks still needed a crutch, he was able to put more weight onto his leg. Two Hawks shows Kaya his new flute, proud of what he made. He tells Kaya out loud in her own language Runs Home had helped him, and he was his friend now. When Kaya tells Two Hawks that he now had to learn how to play it, he insists he could play as he adds a third note to his song.

Kaya notices him when she is with White Braids and Speaking Rain and notes how much he has grown.

Retrieved from "https://americangirl.fandom.com/wiki/Two_Hawks?oldid=80714"
Community content is available under CC-BY-SA unless otherwise noted.