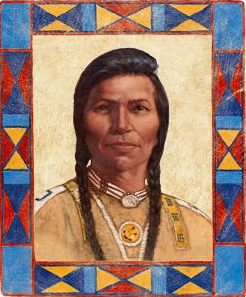 Kaya's father is an expert horseman and a wise village leader. He taught Kaya how to properly tame her horse so that she could race it. He rides a stallion named Runner.

He found Kaya when in the bitterroot mountains when she'd escaped from her captives and took her and Two Hawks home.

Toe-ta is away with the rest of the men hunting when raiders invade their camp. When Kaya and Speaking Rain are taken captive, the two have hope that Toe-ta would organize a raid to rescue the two of them, but Kaya is unsure he would return to the camp before the raiders moved further east.

Kaya spots Toe-ta on the Bitterroot Mountains and calls after him. Toe-ta, relieved to see Kaya alive, wraps her in his robe and held her close. When Kaya asks how he found her, he explains that they had searched but found nothing. Two nights ago, a scout visited their camp and told them about the new cairn by the sacred place on the Buffalo trail. The cairn's small size indicated someone with small hands like Kaya made it, and the magpie feather reminded him of Kaya's nickname, so Toe-ta decided to leave the hunting camp to look for Kaya up by the trail. He admits he wouldn't have spotted Kaya amongst all the snow if she hadn't called out after him.

When Kaya tells him her story, Toe-ta assures her she may see Steps High again, and they would help Two Hawks join his people. When Kaya admits it was her selfishness that got Speaking Rain taken captive, he tells her they would do all they can to find her, but Kaya must not blame herself for being taken captive. He knew she had endured much, but he was thankful to have her alive and well with him again.

Toe-ta is with the rest of the family during the New Year Gathering. When Swan Circling goes missing after going out to fetch medicine, Toe-ta is a part of the search party along with Claw Necklace and two other men. Toe-ta helps with Swan Circling's burial, and later assists Eetsa with giving away Swan Circling's belongings. He announces to Kaya and the rest of the tribe how Swan Circling approached him and Eetsa to pass on her name to Kaya in the event of her death, and that they accepted her gift to Kaya with gratitude.

Retrieved from "https://americangirl.fandom.com/wiki/Toe-ta?oldid=89847"
Community content is available under CC-BY-SA unless otherwise noted.