The BeForever cover of The Stolen Sapphire.
Samantha's Series

In relation to Samantha's Series

After the events of The Curse of Ravenscourt

The Stolen Sapphire is a Historical Character Mystery that is part of Samantha's books.

Chapter One: A Strange Encounter

Samantha is waiting at Bertram's Book Shop for Nellie, when Mr. Bertram comes up to her and tells her that her aunt requested a few books that were just delivered and that he thinks that they are for the trip. When Mr. Bertram offers to let Samantha wait inside for Nellie, Samantha tells him that Nellie is hardly ever late and should be there any minute. When Nellie's blue coat comes into sight on the street, Samantha says goodbye to Mr. Bertram. Nellie apologizes that she is late and says that it is because her teacher, Miss Frantzen, gave her problems to do while she was away. It is revealed that the next day, they were sailing on a voyage to Europe with Grandmary and Archibald Beemis. Then, Nellie's friend Jamie comes down the street and asks to talk to Nellie alone. Samantha sees Jamie handing a small package to Nellie and Nellie shaking her head. Samantha wonders what the small package is and what Jamie is telling Nellie or asking her to do.

Chapter Two: All Aboard

Chapter Ten: A Question of Identity

Discusses ocean travel in the turn of the century. Topics include: 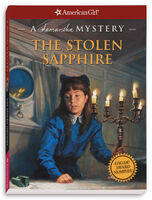 Retrieved from "https://americangirl.fandom.com/wiki/The_Stolen_Sapphire?oldid=93331"
Community content is available under CC-BY-SA unless otherwise noted.