Z's character and doll pages are titled with "Suzie" but the article titles on Suzie's character page seem inconsistent:

Since it appears AG is marketing her as Z and thus by her nickname, I think the best happy medium is that we should probably switch to that for her, much like Kit, and use what the company uses dominantly. For example they don't call Kit Margaret directly, but they reference it as her name (see her new golf set with her initials.) I'll move the pages. Nethilia (talk) 15:34, April 5, 2017 (UTC) 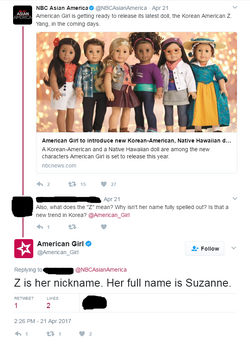 In light of AG's press release for Z's debut and many other online articles referring to Z being short for "Suzie", I've made a screencap from AG's Twitter account that mentions Z's formal name in the event the original tweet gets taken down. (Personally identifiable information and avatars from any individuals has been blacked out for privacy reasons.) --AkaiKaze (talk) 14:49, May 2, 2017 (UTC)

Retrieved from "https://americangirl.fandom.com/wiki/Talk:Z_Yang?oldid=78314"
Community content is available under CC-BY-SA unless otherwise noted.