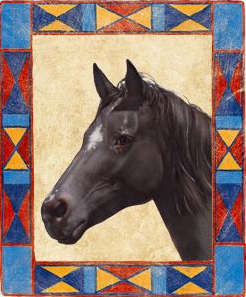 Kaya tries to race with Steps High, despite her father's warnings that Steps High isn't ready to race. She ends up nearly throwing Kaya off and has a distrust for Kaya. But at the end, she follows Kaya's instructions to go into the rushing river and swim when Kaya saves Speaking Rain.

Kaya is worried that Steps High will get kidnapped by the enemy tribes, which she is, leading to Kaya and Speaking Rain's capture as well. Steps High is left behind when Kaya escapes with Two Hawks.

Kaya finds that Steps High is free and has a foal. She helps Kaya escape from the forest fire.

Kaya and the Flood

Steps High was introduced to Kaya's Collection in 2002. Retail cost was $60 and later increased to $75.

Dark brown Appaloosa mare with spotted rump and hooves. She also has a white star on her forehead. Brown and white "fur" covering with plastic base. Plastic lower legs with white airbrushed spots. Brown eyes. Black mane and tail.

In 2019 Steps High was rereleased with the bridle unknotted and was now bundled with Kaya's Saddle. The cost was raised to $115.

Retrieved from "https://americangirl.fandom.com/wiki/Steps_High_(horse)?oldid=89290"
Community content is available under CC-BY-SA unless otherwise noted.