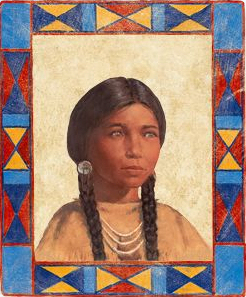 Speaking Rain is the adopted sister of Kaya'aton'my.

She is very close to Kaya, and considers Kaya to be her best friend.

Kaya leaves Speaking Rain to look after her brothers while she races. The boys become tired of Speaking Rain's games and leave her. Later, while helping Kaya look the knife that was left behind, she fell over an edge that was over the river. She tries to swim for shore, but the river is too fast. Kaya saves Speaking Rain with Steps High.

Due to her blindness, Speaking Rain is unable to help with picking berries, and stays at camp to work on her weaving. When Kaya returns from berry picking, Speaking Rain can sense the sadness in Kaya's voice and asks her what happened. When Kaya explains how she got called 'Magpie' again, Speaking Rain comforts Kaya by suggesting she go to Steps High, who didn't care about her nicknames.

When raiders invade the camp, Speaking Rain holds onto Kaya's hand, trusting her to lead her into the woods with the rest of their family. When Kaya runs after Steps High instead, Speaking Rain is captured along with Kaya.

When the raiders take their first rest, Speaking Rain asks Kaya where they were and what would happen to them. Kaya tries to assure her that their men would go after the raiders to save them, and tells her to be strong, a statement Speaking Rain agrees to. When they're instructed to sleep, Speaking Rain is too afraid to sleep, but reminds Kaya about the lullaby Kautsa used to sing to them and sings it to Kaya.

At the raider's camp, the women are initially upset about the raiders bringing a blind girl for a slave, and Kaya fears they might consider her useless and abandon her here. The raider leads Speaking Rain to a mother with a baby, and Kaya guesses he told her Speaking Rain could tend to the babies while the mothers worked. Kaya also makes a point to work as hard as she could in order to make up for Speaking Rain in an attempt to protect her. Speaking Rain sleeps in the same teepee as Kaya and the Otter Woman, but isn't tied up as the camp assumes a blind girl wouldn't try to run away.

When Speaking Rain helped Kaya collect and carry the firewood back to camp, the two discuss how they could escape. Speaking Rain could get the knife to Kaya so she could escape, but Kaya would have to go on without her as she would never be able to keep up with her on the run. Kaya refuses at first, but Speaking Rain is firm, saying Kaya was their only hope and she must escape so she could bring others back to get her. When Kaya looses heart, Speaking Rain asks her what Kautsa would do, and knowing Kautsa would try to escape gives Kaya courage. The two plan to start saving some of their food for Kaya's journey.

On the night of Kaya's escape, Speaking Rain waits for Kaya's command before getting the knife to her. Speaking Rain took Kaya's place by the Otter Woman to deceive her if she woke up. Kaya clasped her hand and Speaking Rain squeezed it back, a vow they'd be together again.

Speaking Rain is spending her six months with White Braid's tribe and Kaya briefly mentions she misses her.

Kaya and the River Girl

Retrieved from "https://americangirl.fandom.com/wiki/Speaking_Rain?oldid=89845"
Community content is available under CC-BY-SA unless otherwise noted.