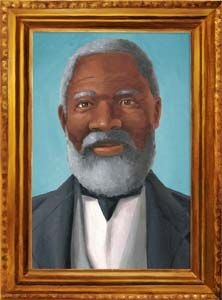 Simon Rey is the grandfather of Cécile Rey.

Simon Rey, called Grand-père by Cécile, is the father of Jean-Claude Rey. It is likely Grand-père is a widower, as his wife, who worked as a milliner,[3] is not seen in Cécile's books.

Grand-père originally worked as a sailor before settling in New Orleans. He is a kind man with a talent for storytelling, a talent Cécile shares when she volunteers her time at Holy Trinity Orphanage.

Grand-père tells Cécile stories about sailing, which makes Cécile long for adventures of her own. He also sneaks Cécile out of the house to get her favorite sweet, pralines, at the store while her mother is gone for the afternoon. There they encounter hostile white men from outside of New Orleans who treat him as a slave. Cécile and Grand-père stand up to the men. He explains that more outsiders have been entering the city and they dislike the free people of color.

Retrieved from "https://americangirl.fandom.com/wiki/Simon_Rey?oldid=91639"
Community content is available under CC-BY-SA unless otherwise noted.