Several short stories were originally published in American Girl Magazine. Each was accompanied with full-color illustrations and a small Meet the Author section. Some early ones had something akin to Looking Back sections; however, many of these focused on multiple time periods. The historical after details began to be phased out in 1996. Most of the stories occur simultaneously during the events of the characters' Central Series, though some happen before or after, and are canonical to the character's series.

The short stories were slowly transitioned out of the magazines around 1999 as the magazine shifted towards being independent from the Historical Characters and more focused on modern girls and their personal situations.

The following stories were published in the magazine:

While Josefina was released in 1998, she had no stories published in the magazine (though she had excerpts from her central series).

Two of Kirsten's stories were never published outside of the magazines.

From 1999 to 2003, the short stories were released in individual, hardback book form yearly. The books were about five inches tall and four inches wide, with a character's personal color as the spine color. Each story included illustrations, vignettes, and sometimes Looking Back sections that had accompanied the stories in the magazine; others had redone illustrations to reflect changes or new illustrators, including later released outfits. After-story crafts, recipes, and activities were also included both for stories that had been in the magazine. Retail cost was $3.95.

Kit's and Kaya's stories were brand new since they had not been around when the stories were published in the magazine and, while Josefina's first story was published in 1999, it was never published in the magazines. Addy had three more stories written over the years. Kirsten, however, had two of her magazine-published stories skipped: Kirsten's New Teacher and Kirsten and the Thief; this could have been either to keep the number of stories among the characters to five at maximum or because the series ended before the last two stories could be released with further stories for other characters. Titles of several stories were changed to include the character's name prominently.

The stories were also sold as box sets, combining the year's short stories into a six-book (with the addition of Kit and later Kaya, seven-book) set. Box sets were also sold in groups of three for Felicity, Josefina, Kirsten, Addy, Samantha, and Molly which contained the story books released from 1999 to 2001. The individual short stories were phased out in late 2005, leaving Josefina, Kirsten, Addy, Samantha, and Molly with five individual volumes each, Kaya with one story, Felicity with four, and Kit with two.

Hallmark released versions of the short stories as well. Each copy had a small, attached ribbon bookmark emblazoned with the Hallmark logo and an ex libris page in the front. Otherwise, they were nearly identical with the standard published editions. 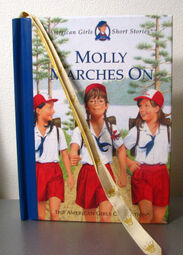 A Hallmark copy of the short story "Molly Marches On" 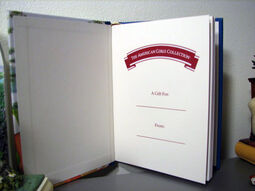 In 1999 and again in 2003, individual short stories were packaged with an outfit and hanging garment bag. Felicity did not receive a set in 2003 as she had been partially retired at the time; Kaya, who at the time did not receive additional historical outfits, was also excluded from new outfits. The 2003 outfits were also released in a Stories and Outfits Collection for each character except Felicity.

In 2006, the short stories for each character were bound into a single book of five short stories with a ribbon bookmark and a raised picture on the cover from one of the stories. While the Looking Back sections were kept and added for new stories, all the activities and the individual "Meet The Author" flashbacks were removed with one overarching "Meet the Author" section instead.

In order for every character to have an equal amount of five stories, new stories were written for Felicity's, Kit's and Kaya's collections. Felicity was given one new short story, Felicity's Valentine. Kit was given three--Kit's Winning Ways, Kit Uses Her Head, and Kit and Millie Ride Again. Kaya, having only had one story previously, was given four new stories--Kaya and the Beavers, Kaya and the Flood, Kaya and the Grandmothers, and Kaya and the Injured Dog.

The five-story books were phased out in 2007. No Historical Character has received any short stories since the collection's final retirement.

Added to Part of the Central Series

In the editing of Samantha's Central Series for the new abridged books, the two short stories Samantha Saves the Wedding and Samantha's Blue Bicycle were integrated into the plotlines of the book Samantha: The Gift, with changes to interweave them.