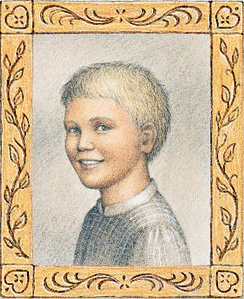 Peter Larson is the younger brother of Kirsten Larson.

Peter is an eager young boy, though sometimes his excitement and age makes it difficult for him to keep promises and secrets. He looks up to his older siblings and trusts their judgement, something Kirsten uses occasionally against Peter in order to get her way.

Peter goes to Powderkeg school along with Kirsten and Lars. Kirsten notices how Peter seemed to pick up on English incredibly quickly since arriving to America.

Peter stays up with the rest of the family, waiting for Kristen and Papa to return. He's the one to excitedly tell Kirsten and Papa about this upon their return, but he ends up falling asleep besides Papa by the fire. He wakes up when Kirsten enters the room, happily crying out that it was Christmas time.

Peter is bringing in the cows to be milked when the wind blows his cap off, and Mama notices the approaching tornado as she picks up his cap. Kirsten grabs Peter's hand and tells him they have to go to the cellar to be safe, and Peter grabs Missy the cat before running to the cellar.

When Missy gives birth to her kittens, Peter is with Anna checking out the kittens. Peter says that the little grey kitten was so little it will never live, repeating what he heard Uncle Olav saw about one of the piglets. When Peter asks if she liked the little grey one the best, he states he liked the black and white one, the largest of the litter, the best. He liked the puppies that were the biggest and the calves that were the biggest too. When Kirsten asks him to make sure the kitten didn't get lost in the grass, Peter shoved his hands into his pockets the way Lars did and says Missy will take care of her kittens and doesn't need help.

While Mama is giving birth, Peter says with Kirsten over at Uncle Olav's cabin to do chores. When Aunt Inger waves them over, he and Kirsten dash back to the cabin. Kirsten grabs his hand as they came to the door and she feels him trembling as he asked if Mama was alright. When they see the baby, Peter softly says he thought a baby would be bigger, and Mama explains to him babies start out very small, but their baby was big enough. Peter grins as he repeats she was big enough.

Peter asks how soon they were going to raise the barn, starting to phrase his questions about men's work with "we" as if he was going to help as well. Papa was even teaching Peter to split wood with the small axe.

Peter is at the barn raising dance and tries to stay awake, but ends up falling asleep with his clothes on.

Peter goes along with Kirsten to help her fish trout for their dinner. Mama mentions that the last time Peter went fishing with Kirsten, he had chased a skunk and Peter makes a face, saying he only did it once. When Kirsten whispers to Peter that Mama worried too much, he says how Papa said mothers were supposed to worry. When Caro follows after then, Peter asks Kirsten to let the dog join them, saying how he liked the stream just like they do. Peter promises that he can catch the fish they needed and take care of Caro at the same time.

At the stream, Peter wishes they could go swimming instead, contrary to Kirsten's enthusiasm for fishing. When Caro gets stung by a bee, he's the one to hold the dog while Kirsten removes the stinger. Peter is on the verge of tears as he swears he had fully intended to take care of Caro, but got distracted by the fishing. When Kirsten says there must be bees nearby, Peter is initially confused to her excitement, and Kirsten has to explain the value of honey to him. When Peter wants to go with Kirsten to find the tree, she uses his promise to look after Caro against him so she can look on her own. Peter brings up that Kirsten might get stung, but stays with Caro as instructed.

When Kirsten returns after having found the bee tree, he tells Kirsten that messing with bees would be trouble and they should tell Papa about the tree. Kirsten tries to shame Peter by asking if he was afraid, but he openly admits he was a bit afraid and bets that Kirsten was too. Kirsten manages to get him to keep her plan a secret by threatening to tell their parents that he hadn't taken care of Caro.

Peter helps Kirsten and his cousins collect raspberries, though he ate almost as many berries as he collected. Peter is excited at the news that the Fourth of July celebration would include canons firing and running races. He bets he could win a running race, and while Lisbeth doubts it, Anna says he would have five days to practice running faster.

When Kirsten asks Peter to help her collect the honey, he keeps bringing up how Papa would get upset if Kristen got hurt. Kristen manages to entice Peter into helping her by saying how he could get his own knife like Lars that he could whittle with, though he still looks worried. When Caro wants to join them, he asks once again if he could tag along, and is immediately concerned when Kirsten mentions the possibility of running into bears.

In the clearing, Kirsten plans for Peter to hold the torch and he asks to join her under the bee veil. When Caro chases out a bear cub and Kirsten tells him to get Caro away, he throws a stone at the cub in an attempt to scare him off. When the mother bear appears, Kirsten is the one to lead Peter away and help him up the tree, though he goes against her instruction to keep climbing to give her a hand up the tree. When the bear approaches their tree, he closes his eyes and prays for God to make the bear go away. When the bear goes away, he and Kirsten are too afraid to leave the tree, and he begins to worry about Caro.

When Papa arrives at the clearing, Peter is the one to tell him the whole story. When Papa yells at Kirsten, he stands up for her, saying how Kirsten saved his life and calls her brave.

Peter thinks Kirsten is crazy for wanting to return to the bee tree clearing, saying he wouldn't return even if he had Papa and Lars around. Kirsten attempts to ask Papa if Peter could come along as well, but he quickly says he would stay behind and keep an eye on Caro.

Peter travels with the rest of his family to Maryville for the Fourth of July. When Caro wants to join them into town, Peter and Kirsten both ask their Papa if he could, both promising to take care of him. In town, Peter wants to ask Mr. Berkhoff about his knife, but knows just as well as Kirsten that they shouldn't ask for items their family wouldn't be able to afford. In the store he states that it wouldn't hurt for him to take a look at the knives, and Kirsten urges him to pretend he could have any knife he wanted. Papa mentions to Kirsten that they would use the extra money the honey brought them to get Peter the knife that he wanted, along with Kirsten's hat.

Kirsten on the Trail

After supper, Peter plays with Britta on the bed, tickling her tummy and saying 'Boo!' to make her laugh. When Mama takes out the dried apple pies from the oven, he asks to have a piece of pie now. When he sees the Chippewa at the window, he jumps behind Aunt Inger's loom, asking why they were looking at them. When learning what a raid was, Peter asked fearfully if the Indians came to raid them, and she assures him they only went after other natives.

When the warriors ask to trade for the pies Peter tries to protest, but Inger assures him she and Mama could always make more. Peter giggles when the Youngest Warrior calls Kirsten a raccoon.

That night as they went to bed and heard eerie howls from the forest, Peter is afraid of the noises, unsure if it would be worse if it were wolves or if it was War Whoops from a Chippewa War Dance.

Retrieved from "https://americangirl.fandom.com/wiki/Peter_Larson?oldid=81057"
Community content is available under CC-BY-SA unless otherwise noted.