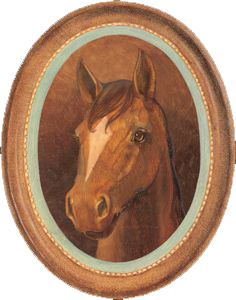 Felicity first hears about the horse at Father's store from Mrs. Fitchett; Jiggy Nye has won her in what was probably gambling. She meets Penny for the first time by walking with Benjamin Davidson to deliver a bit to Jiggy. Jiggy is heard, then seen yelling and trying to back the horse into a work cart. The horse is panicking; she is wild eyed and skinny with burrs in her mane and tail and mud on her rough coat. Felicity's whispers calm her for just a moment, but Jiggy takes that moment to try and tighten the rope and thus panicks her again. She eventually breaks away from Jiggy and Ben (who was called over to that and grab her) and runs around the pasture freely while Jiggy rages at Felicity and Ben. Felicity thinks she is a dream and Ben identifies her as a chestnut mare thoroughbred; she was trained to be a gentleman's mount, not a work horse. Ben thinks that Jiggy Nye has made her vicious and she will never be a proper mount again; Felicity does not believe this, thinking that underneath her wild eyes is a spirit just like under her dirty looks are a beautiful red-gold coat. It is the color of her coat that prompts Felicity to name the horse Penny; Ben agrees on this, as well as encourages her to name the horse after her independent spirit. When they get home Ben tells Mr. Merriman that Jiggy Nye didn't take the bit because he can't control the horse, and that it is a headstrong and independent minded chestnut mare fast as fire. Jiggy Nye's story is that a man found her wandering the woods and put a notice in the paper to have any owner come and claim her, but no one ever did and so Jiggy won her from the man in a bet. Mr. Merriman says that it's a shame that Jiggy Nye has the horse and fears it will not end well; this makes Felicity resolve to go see Penny as soon as possible. Felicity next sees Penny when she goes to the tannery with Nan and William. Penny is tethered down and in even worse shape; she is thinner with more of her coat matted, and a cut on one leg She's straining at the rope, pawing the ground, and jerking and tossing her head. Felicity climbs on the fence and throws sugar to her, and is then caught by Jiggy Nye. Penny whinnies wildly when Jiggy grabs Felicity a second time, and Jiggy tries to beat her but she rears up and breaks free. Jiggy curses that he'll give the horse to anyone that will ride it. Felicity sees Penny running around the pasture as she leaves, glad she's broken free. When Mother hears of this trip she chastises Felicity and insists that Felicity put the horse out of her head; Felicity does not.

Soon after Felicity starts going out every night and taming Penny by sitting quietly near her and bringing her treats. Felicity works her way up to touching, then leading, and finally riding Penny. Meanwhile, Jiggy Nye brings her water but no food, saying he won't feed Penny until she allows him to ride. Felicity continues to ride Penny and tame her, and finally grooms her well and rides her to her home, showing her family that Penny is tame. Her father says that Penny is beautiful, but that she belongs to Jiggy Nye and Felicity must give her back. Felicity protests and when Jiggy Nye shows up demanding she give back Penny, Penny rears in fear. Felicity is forced to give up Penny and is quite upset.

The next night Felicity sneaks out one last time and rides Penny; Penny then runs towards the now mended fence. Felicity is sure that Penny can't make it, but Penny leaps out of the pasture fully. She continues running towards the woods and turns back to see Felicity; Felicity tells her to go on as she is now free. Penny hesitates, then she nickers and runs off into the woods.

Grandfather purchases Penny in a lot of horses after Felicity recognizes her.

Changes for Felicity: A Winter Story

Felicity often rides Penny around her grandfather's plantation. Felicity tells Mr. Haskall that Penny is the fastest of all of Grandfather's horses, which actually puts Penny at risk of being captured to be used for British soldiers. Penny makes noise when Mr. Haskall is inside the stall, but Felicity walks inside the stable before he could take Penny away. When Felicity realizes that Mr. Haskall is a British spy who has been stealing horses, she writes him a trap letter, asking him to take Penny on a morning jaunt in her place. Felicity is worried that she'll lose Penny if her plan doesn't work. Mr. Haskall, knowing how much Felicity loves Penny, takes a different horse.

As An American Girl Product

Penny was originally released as the American Girl Horse in 1998 and marketed as a generic horse that, while resembling Penny, was marketed for both Felicity's collection and the American Girl of Today line. Original retail cost was $62; it was later raised to $75.

The was later exclusively considered part of Felicity's Collection and not seen with modern dolls (though still called the American Girl Horse and never listed as Penny).

Penny was retired in 2010 with Felicity's archival.

The horse was rereleased again in 2011 as a generic horse for the My American Girl line before being permanently retired.

Retrieved from "https://americangirl.fandom.com/wiki/Penny_(horse)?oldid=83287"
Community content is available under CC-BY-SA unless otherwise noted.