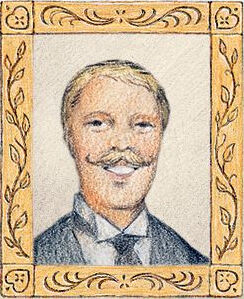 Olav Larson is the paternal uncle of Kirsten Larson.

Lisbeth mentions to Kirsten that Olav and Inger have taken in Miss Winston as a guest; Olav has already set up a small area in the loft to serve as Miss Winston's living quarters. During Miss Winston's first night with the Larsons, Olav has to remind Anna to eat her dinner lest she becomes thin.

Olav works alongside Papa to complete the farm chores before the snowfall arrives. Once the work is complete, he is able to lend his horse Blackie to pull the sleigh into town.

When Kristen and Papa return, Olav helps Papa down from the sleigh, and brings the trunks into the house with Lars. Anna and Lisbeth tell Kirsten how their Papa wanted to go out in the storm to search for the two of them, but their mama had said he would never find them on foot. He is delighted by Kirsten's Saint Lucia's Day surprise.

Uncle Olav helps Papa and Lars with planting the seeds. He is with Papa when Kirsten rides Blackie over to him telling him Mama's baby was arriving. He wishes Papa good luck as he rides off on Blackie. Kirsten wants to run back to help, but Olav kindly tells her walking would get them there soon enough. He explains to her that she would wait with Lisbeth and Anna at his house and there was plenty of work to do there. After lunch, he states they all better get on with what they have to do; babies came when they were ready, and they couldn't hurry things up by worrying.

Uncle Olav works with the rest of the men to raise the barn beams, and partakes in the barn raising dance later on. When the dance ended, Olav is alongside Papa thanking their neighbors and wishing them goodnight.

Retrieved from "https://americangirl.fandom.com/wiki/Olav_Larson?oldid=89696"
Community content is available under CC-BY-SA unless otherwise noted.