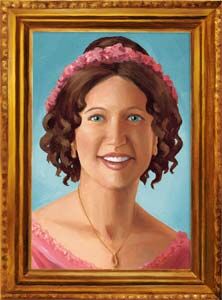 Océane Rousseau is the aunt of Marie-Grace Gardner and wife of Luc Rousseau.

Océane Michel is a French opera singer and voice teacher. She is described as having fair skin, brown hair, and blue-green eyes similar to the color of the ocean.

Océane is regarded as a kind and nice woman who is patient and understanding with her students; Cécile is considered to be one of her favorites. Océane can also see and is willing to teach students who have potential, such as Marie-Grace.

Océane teaches vocal lessons to both Cécile and Marie-Grace. The girls first meet when they are visiting for lessons. She helps Marie-Grace get an invitation to the Mardis Gras Children's Ball, and she loans both girls fairy costumes to use for the balls. Océane is gets frustrated with Cécile at times because Cécile tends to daydream and does not practice enough.

Marie-Grace and the Orphans

While not seen in the book, Marie-Grace mentions to Cécile about Océane having become ill with yellow fever during the special prayer for victims of the yellow fever epidemic.

Océane is ill with the yellow fever, and is in the Globe Ballroom, having been converted into a temporary hospital.  Marie-Grace goes to visit her, and sings for her. Later she marries Luc Rousseau.

Océane is one of the performers for the benefit, she sings a duet with Marie-Grace before Cécile's poetry recitation.

Océane is later seen at the Reys' house, along with members of the Gardner family, as dinner guests following the benefit, discussing music with Octavia Tay.

Retrieved from "https://americangirl.fandom.com/wiki/Océane_Rousseau?oldid=91651"
Community content is available under CC-BY-SA unless otherwise noted.