The Molly McIntire doll was released in 1986, along with Kirsten Larson and Samantha Parkington. They were American Girl's first three Historical Characters. Molly was retired along with Emily Bennett in 2013. Molly was rereleased for BeForever in 2018 exclusively via Costco with the set briefly sold on American Girl's site in 2019. A Special Edition version was released for the 35th anniversary in 2021, and a relaunch was rereleased in 2022.

Molly's meet outfit reflects the need for versatility in one's wardrobe during the World War II era, when clothing restrictions were in place and by necessity, outfits needed more versatility than before and had to mix and match more than prior eras.

The same outfit, with minimal and slight modifications, was rereleased in 2022.

Two red satin ribbons. These come tied on the ends of the doll's braids.

Silver metal glasses with round frames. They come in a red soft slipcase with a white elastic loop to fit around doll's wrist.

The glasses were modified twice. The first change in the late 1990s was to the arms; rather than curving down like more authentic glasses, they became straight. The second change in the mid 2000s was to the shape of the frames, which were made more oval and no longer perfectly circular.

White cotton bloomer style underwear; these are similar to Samantha's bloomers and later Nellie and Emily.

Molly for BeForever was released in a new meet outfit. This set was exclusively available through Costco in 2018. The set included the doll, accessories, Molly's Write to Sleep Pajamas, and her first book (A Winning Spirit) for $119. The full set was later briefly sold on American Girl's site in 2019 for $125.

Dark blue sweater with red buttons in the front and a blue ribbon at the top of the collar. The buttons are non-functional; the sweater closes in the back with velcro. Sweater also features an argyle pattern in the knitting on the front, with white showing through the holes.

Navy, red, and white plaid skirt. Skirt has pleats in the front.

Two red satin ribbons. These come tied on the ends of the doll's braids.

Brown plastic glasses with round frames.

Plain white elastic panties. These are similar to the ones for Maryellen and Melody.

White cotton handkerchief. Edges trimmed in red. Molly's name is monogrammed in red in a corner.

Replica 1943 steel penny. Originally, this was an authentic coin and was later replaced with the replica.

Silver heart-shaped locket on a matching chain. Interior has slot for space for inserting picture. Front has heart and flower engraved on it.

Paper insert that had a small, black-and-white heart-shaped image of James McIntire and text:

Molly's father was a doctor who was far away during World War Two, caring for wounded soldiers. While he was gone, Molly wore his picture in her silver locket. Cut out Dad's picture and glue it inside the heart of Molly's locket. It's a special treasure for Molly and a keepsake for you from The American Girls Collection.

This was not part of the 2022 rerelease as the locket no longer opens to insert a picture.

These were exclusively available in the Costco Bundle.

Red vinyl bag with long vinyl strap. The vinyl is matte rather than shiny (unlike Molly's Classic purse). It has a faux snap on the front of the bag, but actually closes with velcro. Fabric trim.

Silver heart-shaped locket on a matching chain. The locket has a design on the front with the Great Seal of the United States.

For American Girl's 35th Anniversary, Molly was rereleased as a limited edition bundle. The bundle includes the doll in the Classic Meet Outfit with thin eyebrows, Classic meet accessories, the first edition parchment style of Meet Molly (illustrations by Nick Backes), and an older-style box (modified with visibility window) for a total cost of $150. This bundle sold out in August 2021.

Unlike standard dolls sold at this time, Molly has neck strings. Notably, the locket does not open and is a solid charm; this means that no picture of Dr. McIntire is included. The necklace has the same flower pattern as the original locket, not the BeForever necklace's Great Seal of the United States.

A one-of a kind Molly, designed by Carly Cushie, was auctioned from September 23 to 26th, with all proceeds donated to Girls Who Code. The auction initial starting price was $300 and final auction price was $2,938.88.

The doll was dressed in a blue and white color block ponte jersey jumpsuit with red trims, a red scrunchie (with her hair up in a single ponytail), the Bright Red Sunglasses, and the shoes from Joss's Cheer Competition Outfit. She also came with her BeForever red vinyl purse.

The matching outfit for children was available, with the first three being part of the Sporty Separates:

The above two were also sold together for $70.

The components were retired around 2000.

A Molly mini doll has been available since the debut of mini dolls in 1995. There are five versions with her meet outfit: the Pleasant Company mini doll, the Mattel mini doll, the 2016 Classic Meet doll, the BeForever mini doll, and Courtney Moore's mini doll. The 2016 doll was a limited run re-release with the newer face mold and plastic body; the style was reused for Courtney's doll. Her BeForever doll was released in early 2018 and remains available. 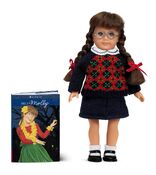 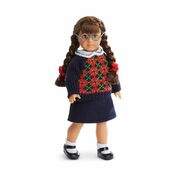 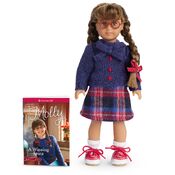 In 2020, Courtney's Collection released Courtney's Pleasant Company Doll, designed to mimic the Molly doll in the classic 1986 style packaging. Her story states that Courtney relates to Molly, whose father is away like Courtney's.