These are minor characters in Courtney Moore's series.

Sarah Barrett's mother. She owns a bakery and Courtney thinks she makes the best chocolate chip cookies. When Maureen D'Amico runs for mayor, she becomes her campaign manager.

Mike's late wife and Tina's late mother. She had the same dark hair and wide smile like Tina, was really funny, and had a lot of allergies (which is why Tina never had a pet growing up). Her birthday was early in the year. Tina remembers her as liking to dance, making really good cupcakes, and braiding Tina's hair. She took Tina to special places such as the carousel at the local zoo.

She died when Tina was six (so approximately in 1979) of an unstated prolonged illness, and Tina keeps a picture of her taped to the wall near her bed. The various ceramic figurines that Tina owns used to belong to her.

Tina doesn't talk much about her until after the Challenger Disaster, when she opens up to Courtney about her and how when someone dies it reminds her of her mother.

A hairdresser at Radiance Salon.

The principal of the school.

A stylist at Radiance Salon. She pierces Courtney's ears.

The teacher of the other third grade class.

A hairdresser at Radiance Salon.

A student in Courtney's class. 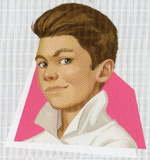 An irritating student in Courtney's third grade class. He always has the collar of his polo shirt popped up and is very dismissive and rude to Courtney. Sarah says he often speaks just to hear the sound of his own voice.

A friend of Tina's.

Retrieved from "https://americangirl.fandom.com/wiki/Minor_Characters_in_Courtney%27s_Series?oldid=95988"
Community content is available under CC-BY-SA unless otherwise noted.