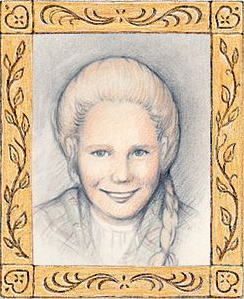 Marta is a Swedish girl who Kirsten Larson meets on the boat to America.

Marta is an active Swedish girl that is very close in age to Kirsten with thick blond hair she keeps in a braid. It is unclear if Marta and Kirsten knew each other before the trip to America but they made fast friends on the Eagle, playing together and sharing food and ideas about life in America. Marta is an only child. She dreams of picking apples in America, thinking that they can be found anywhere. She is also very upset at the idea of being separated from Kirsten after their time together, and is over joyed to find her again in Chicago.

Marta does not get very much characterization as she dies of cholera before her family makes it to Minnesota. It is never said what her parents do after her death.

Marta and Kirsten are playing on the deck of the Eagle at the start of the book. Kirsten sees the distant shore and Marta shades her eyes to get a better look, saying it will be good to walk on land again before shivering. The two girls hide in a coil of rope to get away from the wind. Marta has her doll wearing her apron like a shawl. The two girls share bread and begin talking about what they think America will be like. Marta says that the first thing she wants to do in America is pick an apple, as they are everywhere. Marta then wonders if they will be there by tonight. Papa finds them both and escorts them below deck since it is about to storm.

Marta's family does not take the train to Chicago like the Larsons; her father says the train is loud and smoky, and that they might be afraid of them. Because of their separate routes, she is worried that she and Kirsten will never see each other again. Kirsten tells her to look at the sun when she's lonely as they all see the same sun. Kirsten and Marta promise to look at the sun and pray for each other, and Marta promises to look for her everywhere.

When Kirsten arrives at the boarding house and steps on the porch where the children are, Marta calls her name to catch her attention--her family made it to the same place. She runs up to Kirsten happily and the girls embrace and whirl. At dinner Marta's father says they are back with friends and the two families will stay together the rest of the way to Minnesota. Kirsten and Marta hold hands under the table.

Marta's family takes the riverboat with the Larsons. She and Kirsten try to go to the upper deck but are shooed away by a sailor. The first two days Marta and Kirsten play together, watching the hawks overhead and the fish in the river. The third day, Marta is not there; Kirsten goes out on deck and finds her father. He informs Kirsten that Marta has cholera. Kirsten cannot believe this as she was fine last night. She doubled over with a pain in the night and is in the sick bay. Kirsten, despite the warning from Marta's father, runs to the sick bay. Marta and her mother are there. Marta is lying on a straw mat, her knees drawn to her chest. Her lips are cracked and dry and her mouth is open as if she can't breathe; her eyelids flutter and she moans and trembles when her mother tries to wipe her forehead. She is not even conscious enough to see Kirsten or hear Kirsten speak her name. When Kirsten tries to come closer Marta's mother tells her to leave and that Marta will get better.

Marta does not get better, however; she dies that night. Kirsten initially thinks she is better when she goes to the sick bay and does not see her. Kirsten comes out on deck and sees the sailors on shore carrying Marta's coffin (not realizing it is such). When she asks Marta's father (who is holding his wife close) where Marta is he points to the coffin, explains that Marta died that night, and says her soul is in heaven before hiding his face in his hand.

Marta's portrait is shown in Kirsten Learns a Lesson but she is only mentioned in memory.

Retrieved from "https://americangirl.fandom.com/wiki/Marta?oldid=86181"
Community content is available under CC-BY-SA unless otherwise noted.