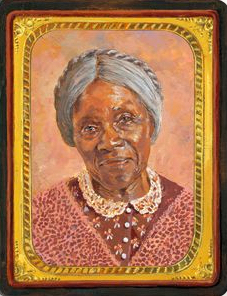 M'dear is an elderly woman who lives in the boarding house Addy and her family move into. She features mostly in Happy Birthday, Addy!

M'dear is a kind elderly woman who cares for children. She makes friends with Addy and gives her advice and comfort. Addy enjoys helping her out.

M'dear is blind, but uses the rest of her senses to "see." It is likely she became blind as she got older. She is an accomplished quilter.

As a young girl she used to work on Society Hill as a chore girl.

Addy first hears about M'dear when Mr. Golden is moving her into the boarding house. Addy is disappointed that she's not a playmate as she's lonely in the afternoon. That night after dinner she sees the candlelight and Sunny in his cage, and M'dear calls out for her to come in. She says she knew Addy was a child because of her small close footsteps. She is the one who says that Addy should pick her own birthday as she doesn't know when it is. She also says that while Sunny is caged, the cage doesn't hold his spirit—his song.

Through the book M'dear gives Addy advice. Addy learns how to hear the double Dutch ropes by listening without seeing. When M'dear needs medicine, Addy and Sarah go to get it together, resulting in the incident on the streetcar. M'dear reassures the upset girls by saying how people who are prejudiced are blinder than she is, and that Addy and Sarah should not let prejudice lock them up.

When the war ends and Addy picks that day for her birthday, M'dear gives her a tin of benne candies and two of Sunny's feathers to remind Addy to always let her spirit sing out.

M'dear is seen in the kitchen lamenting the death of Lincoln with the other adults.

M'dear is helping Addy with the quilt she's making for her parents' wedding day; Addy is storing it in her room. She inspects Addy's work with her fingers and says it has improved. When Addy discusses Auntie Lula and Uncle Solomon and how she wishes they were there, M'dear explains that a quilt can be a reminder of the past. She has Addy get out a quilt she made, that has fabric from clothing her late husband wore. She made it after he died and it serves as a reminder for her. The appliqués on her quilt are inspirations from her husband's career as a blacksmith. These inspire Addy to add them to hers, and M'dear tells her to just think about the right things to add.

After being upset with Harriett's accusation that her parents aren't really married since they only jumped a broom, Addy thinks to discuss it with M'dear. M'dear is resting, however, and so Addy ends up discussing this with her mother.

Addy goes back to M'dear's room to complete the quilt just before the wedding. After the wedding Addy brings the quilt to M'dear and has her run her hands over the appliqué of a broom. M'dear is able to tell what it is with feel alone.

M'Dear is only seen as the Walkers are leaving the boarding house. She tells Addy to remember that she is always loved.

M'dear is not portrayed in the play at all. However, as the cover of Addy's Wedding Quilt is used on a lot of the advertising from the play and she is on the cover, she can be loosely associated with it.

Retrieved from "https://americangirl.fandom.com/wiki/M%27dear?oldid=93295"
Community content is available under CC-BY-SA unless otherwise noted.