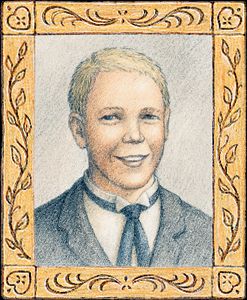 Lars Larson is the older brother of Kirsten Larson.

Lars is 15 by the time Kirsten Saves the Day takes place. As the oldest son in the family, he helps Papa out with a lot of work that isn't always trusted to Kirsten. He enjoys making wood carvings and is talented enough to sell some of his work. Lars appears to be rarely intimidated or afraid in the scenarios he finds himself in, a quality that Kirsten greatly admires.

Lars attends the Powderkeg school along with Kirsten and Peter. Kirsten notes that Lars seemed much more confident, unintimidated by having a stern teacher like Miss Winston.

Lars stays up with the rest of the family, waiting for Kirsten and Papa to return. He helps Uncle Olav to bring the trunks inside. He is delighted by Kirsten's Saint Lucia's Day surprise.

Lars is noted to be helping Papa and Uncle Olav with planting the seeds and raising the barn beams.

When Kirsten finds the bee tree and thinks up of items they could buy using the money they'd earn from the honey, getting Lars a new pair of boots so he wouldn't have to work barefoot is one of the items. Peter also dreams of getting a knife like Lars so he could whittle and make carvings like him.

Lars helps Papa saw down the bee tree and bring the bee colony back to the farm. When Kirsten volunteers to carry their bee veils, Lars is confused as he thought Kirsten was afraid of bears. He grins when Kirsten explains she would feel less afraid if she returned to the clearing with him and Papa.

When the family goes to Maryville for the 4th of July, Mr. Berkhoff asks Lars if he brought any more of his little wood carvings to sell as one of the town ladies had asked about them. Lars blushes, not used to the praise, and says he brought a few with him.

Lars, John Stewart, and Kirsten are out hunting and setting traps in the forest, as the men have gone to work at the logging camp for the winter. Lars convinces John to let Kirsten come with them due to her knowledge about the animals and forest, and warns her about bringing home a wounded baby raccoon.

Following the destruction of the Larson cabin, Lars makes preparations to go trapping with John; upon hearing John's news that the Stewarts will be heading to Oregon, he expresses a desire to go to Oregon as well. He is optimistic that any furs and pelts caught before Papa returns home with his earnings will be enough for the Larsons to purchase the Stewarts' house.

On a trapping excursion, Lars and Kirsten are unable to return to the farm. When Kirsten finds a set of footprints from old-fashioned snowshoes, Lars identifies them as possibly being Old Jack's footprints. Upon following the tracks to Old Jack's cave and finding Old Jack dead, Lars has to remind Kirsten that staying inside the cave would be much safer for the two of them than trying to find their way home in the dark. He is amazed at the quantity and the quality of the furs and pelts Old Jack managed to trap, and since Old Jack is dead and with no known relations, Lars says the furs and pelts now belong to the Larsons. Lars tells Kirsten at daybreak, they will bring the furs back with them, pile stones at the door to prevent any wild animals from entering the cave, and when Papa returns in the spring, they will come back and give Old Jack a proper burial.

Lars goes into town with Mama and Aunt Inger to get supplies they have run out of over the winter. He returns the next day with the others, riding a sleigh.

When Kirsten is troubled by the promise she made with Ezra, she turns to Lars for advice as he had given her good advice before, and she needed some now. She finds him behind the barn chopping firewood. Kirsten recalls how he carved a little deer as a gift for Mama, and Lars remembers that Kirsten kept her promise and Mama was very surprised at the gift.

When Kirsten asks if Lars would ever break a promise Lars is quick to say he never would. When Kristen persists, Lars leaned on the axe the way Papa did when he stopped to work things through. He says if maybe Peter made him promise not to tell he was doing something really dangerous, if he might be hurt or killed because he had kept his promise to him, he would have to tell. He says a person's life is more important than a promise.

When Kirsten asks if he's ever been asked to keep that kind of promise, Lars says no, that no one's asked him to make a promise he couldn't keep. He says he was as good as his word and asks if Kristen was the same. When Kirsten says she was, he smiles that he thought so, reminding her how their Papa said no one will trust them if they weren't, and he returns to his work.

Retrieved from "https://americangirl.fandom.com/wiki/Lars_Larson?oldid=81058"
Community content is available under CC-BY-SA unless otherwise noted.