The Kaya'aton'my doll was released in 2002 and was not updated in any major way for the BeForever release.

Kaya's skin tone is somewhere between Addy's and Josefina's.

Kaya's meet outfit represents the traditional deerskin clothing worn by Nez Perce girls and women in the 1760s. Although the pieces are called "deerskin," "porcupine," etc. in the descriptions, they are not made from real animal products.

Deerskin dress trimmed with fringe and blue beads. White beads run across the front seam. There is a dark spot on the center front to simulate a deer's tail. Velcros up the back.

Brown leather belt. It is tied in front and velcros in the back.

Two round abalone shells on a light brown elastic band.

Two short leather ties at the end of each braid.

Synthetic porcupine-quill necklace. The necklace has three chains connected at the back clasp: green, blue, and red. The ends are tipped black and there are white round seed bead spacers in groups of either two or three.

The clasp was later changed to a heart-loop clasp.

Rectangular hip pouch. Woven cloth. Flap and upper opening are trimmed in suede, small loop in flap. Decoration on flap of octagonal star with lines and four four-point flowers at corners. Closes with two suede cords attached to the back of the bag through flap loop. Back has two loops to attach to doll's belt.

Woven rectangular cloth bag. Two suede handles. Front has design of repeating triangles with smaller designs inside and trim outside.

Paper map of the Nimipuu/Nez pierce traditional travel areas. Images of native animals, settlements (shown with tipis), rivers, and red dashed-line trails, with people moving along trails in groups from west to east. Trails and settlements span the modern areas of eastern Oregon, upper Idaho, and Montana (eastern Washington and northern Wyoming are shown but have no settlements or paths). Map is bordered with dashed lines and squares simulating beadwork.

Kaya's family traveled often, to hunt buffalo and to visit and trade with other Nez Perce. But they didn't have maps--they didn't need them! Kaya found her way using landmarks, such as mountains, valleys, and rivers. In Kaya's time, the Nez Perce Indians traveled by horseback and used their horses to carry the things they neeed. Kaya rode her appaloosa mare, Steps High.

There were no initial updates for Kaya's outfit or accessories, but she now came with The Journey Begins.

With the launch of BeForever, an outfit inspired by Kaya's Meet Outfit was made available: 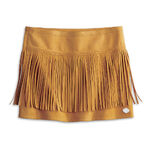 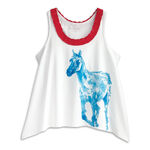 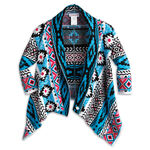 Kaya's mini doll was released when she debuted. The doll's body and book changed in 2014 with the start of BeForever. 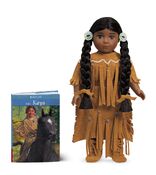 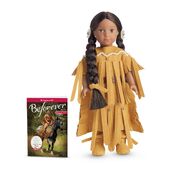