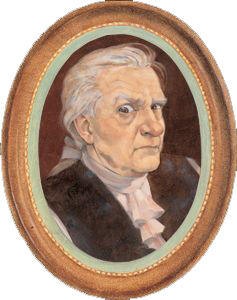 Jiggy Nye is the tanner in Williamsburg where Felicity Merriman lives; he is the first owner of Penny.

Jiggy Nye has no living family; his wife has since passed.

Jiggy Nye is initially a brash, mean drunkard who runs the tannery on the edge of town. He is considered an unreliable, cold-hearted scoundrel who gambles and drinks away his money. Other members of the town do not trust him including Edward Merriman, and he is spoken off in harsh tones. When he drinks too much rum he flies into rages and leaves things undone, including chores. His house is in disarray and the fences around it are falling. Felicity dislikes him more because of his job than his actions, due to her affection for horses and his job of killing them and turning the hides to leather. Due to Jiggy's drinking problem, Mr. Merriman insists he be paid up front for purchases. He also speaks a little archaically, using the word "ye" and insults. He thinks very little of anyone and is not above threatening violence to anyone, including children. He would rather abuse and destroys things than have them taken from him, and refuses to negotiate with anyone.

Jiggy Nye was good with animals before he became a drunkard. It is later in the series that he cleans up his act, enough that Felicity goes to him to help with Penny's delivery.

If Jiggy is a nickname, it is never explained as such in the context of the books.

Jiggy Nye is spoken of first before he is seen; Edward Merriman says that Ben will be delivering a bit and bridle to him. Mrs. Fitchett gossips that Jiggy Nye needs the bit because he got a new horse without paying for it and tells him to warn Ben not to leave the bridal unless he gets payment. Mr. Merriman says he does not take promises of payment from Jiggy Nye anyways. Felicity overhears this conversation and asks her father if Mr. Nye will harm his new horse; Father assures her by saying that he would be foolish to mistreat a good horse.

When Ben and Felicity go to deliver a bit to Jiggy, they hear him showing angrily and a horse's scared whinnies. Felicity runs to see him trying to back the new horse into the shafts of a work cart. He threatens aloud that he will beat the horse and when Felicity calms her for a second with her voice, he takes the time to try and tighten the rope on the horse's neck. This leads to the horse rearing up and almost lifting him off the ground. He yells for Ben to come help him and the two of him.

them are unable to settle Penny, who drags them off and forces them to let go. When he accuses Felicity of spooking his horse and calls her a bothersome chit of a girl, she yells back that he knows that he spooked the horse himself. He then turns to Ben and asks what he is there for; when he asks for the bit and Ben says he's to take payment first, he yells for him to keep it as the horse won't take it and threatens them to leave before he whips them. Ben tells Mr. Merriman that he didn't buy the bit, that he can't control the horse enough to harness it. He also says that Jiggy won the horse in a bet from a man who found Penny wandering, but says that this story is not trustworthy from him. Jiggy is next seen when he croaks in Felicity's ear and startles her while she, Nan, and William are at the tannery. He grabs Felicity off the fence when she goes to see Penny a second time. He yells that he told her to stay away from the horse and that the horse is vicious, as she knocked down the fence trying to jump out. He then warns Felicity to not come around spooking her, and to stay away. When Felicity is grabbed again and Penny

panics, Jiggy tells her to be quiet and calls her a nag, then tries to beat her with a stick. Penny rears up, startling him to fall back onto the muddy ground. He curses Penny, saying that anyone that can ride her can keep her. He heads towards his house and then tells Felicity to get herself and the brats out of there or he'll skin them alive. At supper when Nan describes how Jiggy was going to beat Penny, Father calls him the worse sort of villain—a horse beater.

When Felicity starts visiting Penny, Jiggy Nye almost catches her once as he's bringing out water. Felicity listens as he calls Penny a useless horse, saying that there will be no oats until he can ride her and she can starve for all he cares. When Felicity rides Penny away, Jiggy catches up to her and yells that she's stolen the horse. Felicity calls him on the fact that he said anyone who could ride Penny could have her, and when he denies this Nan says that he did say so and that he is a horrible man. Jiggy says he never meant that a girl could take Penny. Mr. Merriman apologizes and says that Felicity didn't understand. Jiggy protests that taking a horse is a crime. When Mr. Merriman offers to buy Penny, Jiggy refuses, saying that he will treat Penny as he wants and that if Mr. Merriman doesn't take Felicity off he'll rip her off. Once Felicity is taken off, he puts a rope on Penny and says that if he sees Felicity around Penny again he'll kill her. Mr. Merriman tells him to be gone and he leaves after spitting in the dirt. This prompts Felicity to sneak out one last time and let Penny go free.

Changes for Felicity: A Winter Story

Retrieved from "https://americangirl.fandom.com/wiki/Jiggy_Nye?oldid=75970"
Community content is available under CC-BY-SA unless otherwise noted.