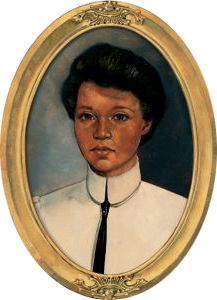 Jessie is a seamstress who works in Samantha Parkington's home in Mount Bedford.

Jessie is a black woman working as a seamstress for Grandmary. She has been working there since Samantha was seven years old. She is skilled at her job as a seamstress, making all the clothing for the household. Her job has also included cleaning up Samantha after her scrapes and entertaining her. She refers to Samantha as "Miss Samantha" and is very gentle and patient with her. She scolds Samantha for her roughness but is much less stern than Grandmary's other employees. She is described as having a soft, beautiful voice that lulls Samantha.

Jessie lives in the colored part of town, due to segregation, with her husband and son.

Jessie works in the sewing room on the third floor of the house. Samantha goes to her after falling out of the tree, as she is much less harsh and will clean her up without telling Grandmary. When Jessie sees Samantha she lectures her about being nearly a young lady and getting into such scrapes, but also cleans her up. Samantha sits in the sewing room, asks her questions and talks to her, and finally asks Jessie for tales of New Orleans and is lulled comfortably by her voice.

Later (after Samantha has met Nellie O'Malley), Jessie comes into the parlor during the sewing hour. Samantha wonders why she is leaving so early in the day and notes her light brown summer coat. Jessie tells Grandmary that she won't be coming back anymore after today. Samantha is shocked but Grandmary simply thanks Jessie for her service and that she will be missed, saying she can see Hawkins for a bonus. Jessie thanks Grandmary, tells Samantha to be very good and she'll be missed, and leaves. Samantha asks what's going on and is told by Grandmary that it is Jessie's business.

Samantha begins to think up fanciful reasons why Jessie left, and after wanting to go see her Nellie says that she can take Samantha to Jessie's house as she's been at the house across the street to get medicine for Mrs. Ryland. The two girls decide to go to Jessie's house in the colored part of town. When Nellie peeks into the window she sees her, Lincoln, and a cradle; Jessie looks up and screams, startling Samantha and Nellie. Her husband Lincoln finds them and laughs. Jessie cleans up the two girls, saying that she declares that she will spend the rest of her life straightening Samantha up after mischief and asks what she is doing there late at night. When told that Samantha was worried Jessie hugs Samantha, saying that she's sorry and that she never thought she'd worry. She then shows the two girls her new "treasure", a newborn son named Nathaniel. Samantha thinks he is tiny with fine brown skin like his mother's, soft black curly hair, and a tiny pink mouth. She calls him beautiful. Jessie beams and puts Nathaniel back in his crib, then explains that she can't work for Grandmary anymore because she must stay home with the baby while Lincoln works as he's gone so often. But she will come visit with the baby. She then sends Lincoln to walk them home lest she get in trouble with Grandmary.

Samantha asks if Jessie can come back to work and bring Nathaniel with her, and Grandmary agrees to rehire Jessie.

Samantha has made a pincushion for Jessie, as well as a book for her son Nathaniel. As she is working on her presents, Jessie knocks on the door and must wait for Samantha to put her things away. Jessie comes in with the dress that she is working on for her. She has Samantha try it on with her eyes closed, then must readjust the hemline as Samantha has grown taller. She had given Samantha blue silk which she used to make angels. She agrees with Samantha that her dress is beautiful on her, then helps her out of it and into her regular clothes so she can attend tea with Grandmary.

The Lilac Tunnel: My Journey with Samantha

In the film, Jessie is a common maid while a different black woman is the seamstress. Neither her husband nor son are mentioned. Jessie is seen first helping Mrs. Hawkins with flowers; she later brings in the mail and a package. When Samantha asks how old Jessie was when she started working as a maid, Jessie does not answer her question.

Retrieved from "https://americangirl.fandom.com/wiki/Jessie?oldid=94332"
Community content is available under CC-BY-SA unless otherwise noted.