The Isabelle Palmer doll was released in 2014 and was available for only one year before retirement. She is considered the Girl of the Year for 2014.

Coral knit tee with asymmetrical hem; tee dips down to a point on doll's left hip. Coral "Isabelle" tag in left side seam near hem. Flutter sleeves of coral mesh. Black and silver printed dancer graphic on center front of tee, accented with pale pink iridescent sequins of varying sizes and a tutu of light pink mesh. Velcroes up the back.

Isabelle's Shirt and Isabelle's Pants for children were available. 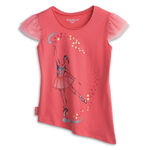 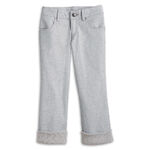