The BeForever cover of Intruders at Rivermead Manor.
Kit's Series

In relation to Kit's Series

After the events of Changes for Kit

Intruders at Rivermead Manor is a Historical Character Mystery that is part of Kit's books.

Chapter One: A Cry for Help

Chapter Six: Secret in the Attic

Chapter Eight: Footprints in the Dust

Chapter Fourteen: "The Pore and Needy Ones"

Chapter Fifteen: Out of Darkness into Light

Discusses the Underground Railroad and the popularity of science fiction during the 1930s. Topics covered: 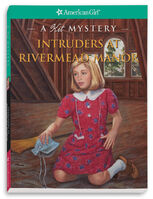 Retrieved from "https://americangirl.fandom.com/wiki/Intruders_at_Rivermead_Manor?oldid=94264"
Community content is available under CC-BY-SA unless otherwise noted.