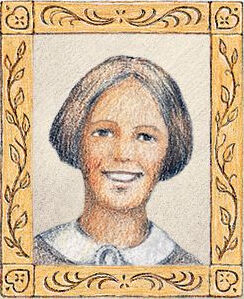 Inger Larson is Kirsten's paternal aunt, whom she meets in America.

Inger is a hearty woman who is experienced with living on the prairie. She has a good sense of business, able to be her own salesperson for her honey and make fair trades with visiting Natives.

Inger stays up with the rest of the family, waiting for Kirsten's and Papa's return. She warms up some potato soup for the both of them to warm them up. Anna and Lisbeth mention that their father wanted to look for the two of them during the storm, but their mama had said it would be impossible by foot.

Inger helps Mama unpack the trunk, not noticing Kirsten sneak her red sash and white nightgown out. She is delighted by Kirsten's Saint Lucia's Day surprise.

Aunt Inger is helping with the laundry when the sky grew dark, and she's the one to recognize that a tornado was approaching and they should go into the root cellar. Aunt Inger brings a lantern and the family Bible with her into the cellar, and closes the cellar door behind her. Inger is aware that the men will know what to do if a wind funnel came their way, and she tries to get everyone comfy as she hands out the leftover apples in the cellar as their makeshift lunch. When Miss Winston shows off her quilt, Inger states she was right to save it, as it was beautiful. When the girls decide to learn to quilt, Inger comments to Mama who knew what their girls would learn next. Aunt Inger is the one to notice the wind had died down and that it might be safe to leave the cellar.

Kirsten is helping Aunt Inger milk the cows when Lisbeth bursts in inviting Kirsten to see Missy's new kittens. Aunt Inger is stern at Lisbeth for being here instead of cooking breakfast and when Kirsten asks for permission to see the kitten, she nods but doesn't smile, telling Kirsten to go on but to be fast about it.

On the day Mama gives birth, Aunt Inger is taking a pot of soup to the Petersons as they've been so sick and would be back by noontime. When Mama starts going into labor and Kirsten rides to get Aunt Inger, she is quick to realize it was Mama's time and runs back to the farm, telling Kirsten not to worry as her Mama was healthy and strong. When the baby is born, Aunt Inger waves her apron like a flag and smiles, inviting Kirsten and Peter to go in to see Mama and the baby.

On the day of Kirsten's birthday party, Aunt Inger calls the girls in for sweets and helps serve strawberries and cream. She gives Kirsten a gift; new hair ribbons in Kirsten's favorite color, pink.

When the family visits Maryville for the 4th of July celebrations and to sell to Mr. Berkhoff, Inger is noted to be especially good at making a bargin. She takes charge in showing off their family's goods to the storekeep, and shows him the beeswax last so as to really hook him in.

Inger goes into town with Mama and Lars to get supplies they've run out of during the winter. Lisbeth repeats her words, that they should be grateful for the wrinkly potatoes. Inger returns with the others riding on a sleigh the following day.

After supper, Inger returns to her weaving at the loom. Inger isn't afraid at all when the Chippewa appear at the window, explaining that Indians stop here to trade with them from time to time and that they only raided other Indians. She beacons the men in, explaining that even though the Chippewa didn't get along with the Sioux, they have always been friendly to them.

Inger greets the leader Five Swans by name, asking what she could do for them today. She accepts their trade of four prairie chickens for their two pies, as they needed the meat and could always make more pies.

Inger smiles when the Youngest Warrior calls Kirsten a raccoon. When Kirsten insults him, she tells Five Swans not to take offense, that Kirsten was just a little girl. When the warriors leave and Kirsten asks if they would stop by after the raid. Inger explains they never knew when they'll see them, but says when they do come back, not to do any more name calling.

Retrieved from "https://americangirl.fandom.com/wiki/Inger_Larson?oldid=81054"
Community content is available under CC-BY-SA unless otherwise noted.