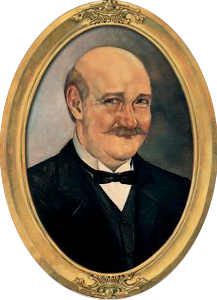 Hawkins is the butler and head of the servant staff who works in Samantha Parkington's home in Mount Bedford.

Hawkins is the butler and thus the head of the staff at Samantha's Mount Bedford home. He is most likely married to Mrs. Hawkins. He is very proper in his task, but does allows Samantha to help with his chores when she pops up to talk; he puts her to help with his tasks as they talk such as waxing furniture, washing windows, carpet beating, silver polishing, and washing windows; he feels it is easier to talk when the hands are busy.

Samantha speaks to him the same way she does Jessie and Mrs. Hawkins, as a confidant as she is an only child in a large house.

Hawkins is first seen announcing the arrival of Gardner Edwards and Cornelia Pitt as they arrive after driving up in an automobile; to Sam, she thinks that the more confusing things are, the more dignified he looks.

Hawkins is mentioned when Jessie leaves; she is told to go to him for a bonus. He is later seen polishing silver in the butlers' pantry and whistling; he pulls out a chair and has Samantha begin to polish silverware while she talks. When asked about Jessie's departure and why no one will tell Samantha what happened, Hawkins smiles with an understanding look in his eyes but then says that Jessie is fine and Samantha should just trust what is going on. Samantha, tired of not getting answers, leaves.

Hawkins first appears when Agnes and Agatha show him the roses they got for Samantha. At first, Samantha fears that Hawkins would be angry at the removal of his roses, but he doesn't mind. He lets Eddie Ryland make ice cream with the three girls. He doesn't see Eddie as a threat, and lets him see the ice cream before the birthday party.

The Lilac Tunnel: My Journey with Samantha

Retrieved from "https://americangirl.fandom.com/wiki/Hawkins?oldid=73645"
Community content is available under CC-BY-SA unless otherwise noted.