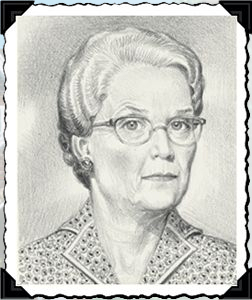 Mrs. Gilford is a dutiful woman who cares for Molly and her siblings after school. Her tasks are to cook for the family, keep the house clean, and watch the children after school until Mrs. McIntire gets home from her job at the Red Cross. She is an experimental cook and sometimes asks Molly to try her inventions. She is also a firm believer in not wasting food.

Her personal story and characterization are greatly expanded in The Light in the Cellar.

In Meet Molly, Mrs. Gilford serves turnips for dinner and doesn't let Molly leave the table till she eats them all, not wanting her to waste food. Dr. McIntire named Mrs. Gilford's glare the "Gladys Gilford Glacial Glare" and she used to cook more tasty meals before the war. She tried planting a victory garden to cut down on canned goods, but the only crops that grew were turnips, radishes, and lima beans. She is quoted as saying to Molly, "Wasting food is not only childish and selfish, it is unpatriotic. Think of your poor father off in some strange land. Maybe he didn't have enough to eat tonight. And you turn up your nose at fresh turnips. You will not leave this table until those turnips are gone. Completely."

Molly recalls how hard it was to knit socks when Mrs. Gilford was teaching her. Later, Mrs. Gilford is seen making bread without sugar or butter and testing them out on Molly and her friends. They mention the plan to knit socks for the Lend-a-Hand contest and she offers some extra needles and yarn if they need it.

Mrs. Gilford is unfamiliar with Melody Moore, and while she was believed war bonds were a good thing, she didn't see why the rallies had to be 'flim-flam shows with glamour girls singing'. She felt people should buy bonds because it was the right thing to do. When Molly comes up with ideas on how she could earn the remaining fifty cents for her class's war bond, Mrs. Gilford suggests Molly could do chores, and that mopping the kitchen floor, sorting the laundry, polishing the silver and raking the Victory garden would be worth fifty cents.

When Molly and her friends return from the movie, Mrs. Gilford asks how it was. When the girls explain the singing and dancing nurses, Mrs. Gilford mutters that it was absolute nonsense. Mrs. Gilford reminds the girls that the point of the rally was to buy war bonds, not to ogle movie stars, and she reminds Molly that she hadn't started her chores to earn the fifty cents she needed.

Mrs. Gilford checks in with Molly while she rakes the garden and when Molly complains that she would get a cold out in this weather, she tells Molly to rake harder to warm herself up. Mrs. Gilford makes Molly re-polish the silver as it was too streaky the first time, and Molly has to mop the kitchen twice as she forgot to rinse the first time. When she catches Molly singing one of Melody Moore's songs instead of mopping, she sternly tells Molly her problem was that she was so caught up with her imaginary movie friends, she couldn't keep her mind on the task before her. Molly thinks how the trouble with Mrs. Gilford was that she had no imagination and was only preoccupied with boring things like chores. Molly thinks that Mrs. Gilford was incapable of being brave or dramatic like a movie star.

On Friday, when Molly's mom asks how Molly did with her chores, Mrs. Gilford mentions that Molly hadn't sorted the laundry yet. When Molly returns home late, Mrs. Gilford gives her a grim look as she tells Molly she forgot to sort the laundry. She doesn't consider Molly's apology to be sincere, and she tells Molly she would be going home and Jill would be in charge until her mother gets home, which will be very late. She instructs Molly to sort the laundry after dinner, and to put clothes that needed to be mended in the basket so her mother could drop off the mending at her house on the way to the rally. Mrs. Gilford states she had no wish to go to that circus of a rally herself, and she says it would do Molly good to have a task tonight to keep her mind off this 'Melanie Moon' nonsense. Molly attempts to correct her, but she simply says 'whatever' as she leaves.

At the rally, just as Molly was about to go onstage to give Melody the note explaining that she lost the bond money, a jeep honk startles her. Molly is shocked to see Mrs. Gilford standing in the jeep next to the driver, waving something over her head, looking like a fearless general of an invading army. Mrs. Gilford calls out dramatically for 'Miss Moon' to stop immediately, and she strode up to the stage with determination. She nodded briskly to the actress, asking 'Miss Moon' for a moment, and hands the missing war bond money sock to Molly. She explains that Molly's mother picked up this sock by mistake and brought it to her house with the mending, and she knew how important it was as soon as she saw it. Molly thanks Mrs. Gilford and she smiles and nudges Molly to Melody Moore, saying that her movie star was waiting.

The Light in the Cellar

Mrs. Gilford is not a hired housekeeper, but a neighbor who helps out and watches the McIntire children as a favor. She has a son in the military whom she dotes on and loves to talk about; her discussions about him bore Molly to tears. He is killed in action and his death greatly affects Mrs. Gilford and affect Molly as well.

Retrieved from "https://americangirl.fandom.com/wiki/Gladys_Gilford?oldid=87468"
Community content is available under CC-BY-SA unless otherwise noted.