Girls of Many Lands

The line was aimed towards an older demographic with a suggested minimal age of ten years old; it was often shown in catalogs next to the American Girl Minis line as they were targeted toward the same older audience. The characters' ages reflected this older audience; unlike the nine to ten-year-old historical and Girl of the Year characters, the Girls of Many Lands were twelve years old.

Prices were initially in the $48-54 range, depending on outfit complexity for the character. They were later lowered by 50% before the line was discontinued. [4] By mid-2003, a discount was available for multiple dolls- 10% off one doll, 20% for two dolls, and 30% for three or more dolls. 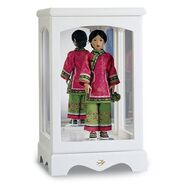 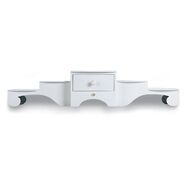 The line was launched for Holiday 2002 with the release of Isabel, Cécile, Minuk, Spring Pearl and Neela; their books; the display case; the display stand; and risers. The dolls were initially intended to each have different face molds, but Minuk's proposed smiling face mold was deemed inappropriate for the character so she shared Spring Pearl's mold. The line was marketed towards an older collector and for display rather than being for play.

In 2003, Saba, Leyla and Kathleen were released along with their books. That same year, American Girl Minis were discontinued, leaving Girls of Many Lands the only line in the catalog targeting older children. By 2004, purchase prices had been lowered by 50% on the dolls, with lower prices on some display components.

Currently there is no line that American Girl offers for older children, though some books are targeted towards an older demographic. The revamping of the books in the BeForever and Girls of the Year lines from 2014 to 2019 (including the combination of the smaller books into larger volumes and removing internal illustrations) was considered an attempt to shift the stories to appeal to an older audience; illustrations were restored in 2019 along with the stories being abbreviated.