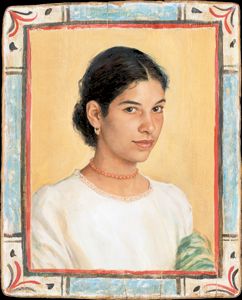 Francisca Montoya is the older sister of Josefina Montoya.

Francisca is fifteen when she is introduced in Meet Josefina. She is described as headstrong, fiery, quick, and impatient. She and Clara consistently get in arguments with each other, most often over small things. She is quite fussy and doesn't like to mess up her hair or clothing; she is also very careful about her skin and keeps her rebozo up to shade her face. She dreams of living a grand life in Mexico City. She is very interested in fancy clothes and the latest fashions. Clara thinks she dwells too much on her appearance. The two fight and squabble more since their mother's death. She is a slow dresser in the morning and is cranky when woken up too soon. She is also old enough to dance during the fandango, unlike her younger sisters.

Francisca is first spoken about; she and Clara are having a fight over who will carry the washing tub. Francisca wins the fight, as she only carries a basket of clothing. When Josefina suggests they run to the stream, she protests but follows along when they take off. She holds the clothes basket in front of her face to stop the two girls' splashing and demands they stop. After Ana talks about the good weather for washing, she mentions that Mamá would want them to pull their rebozos up to shade their faces, so their skin does not look like old leather. She points out the evening primroses to Josefina and remarks that Mamá loved those flowers. She later goes on that she wants to go on the caravan with Abuelito, see all there is to see, and then settle in Mexico City with Tía Dolores, whom she is sure lives in a grand house and knows all the most elegant people. When Clara points out that she couldn't know this, Francisca smirks and says that she's older, so she remembers her; Clara's smart retort almost makes her say something sharp back before Josefina cuts her off. She wishes for lace from the caravan, prompting another smart remark from Clara and Josefina cutting them off before they can start squabbling again. They both agree that they would like chocolate, though. When Florecita makes a beeline for Josefina, Francisca warns that she is after the primroses. She tries to help shoo her off and suggests that Josefina wave a stick at her. Josefina does not listen and ends up losing her primroses.

She is in the kitchen helping Ana prepare the meal for the fandango they are holding, peeling, chopping and stirring. When Josefina is sent out to get onions for the cooking, Francisca goes along with her to gather tomatoes. She stands up suddenly with Josefina and is about to talk when Josefina shushes her. The caravan is approaching, and the two run into the kitchen and tell Ana and Clara before the three younger sisters make their way into the lookout tower. She takes his arm when he says this is his last trip, laughing and saying that he always says this. She is as shocked by Tía Dolores's arrival as the other sisters are. Tía Dolores says she has grown tall and beautiful. When the family goes into the sala, she whispers to Josefina about Tía Dolores's beautiful dress and is sure it is the latest European fashion. She goes to listen to the piano playing and thanks Tía Dolores for playing afterwards.

Francisca does Josefina's hair before the fandango, brushing it out and tying a blue ribbon in that Abelito has brought. When Clara asks if she looks nice, Francisca looks at her and says she looks pretty and the blue suits her well--much to Josefina's surprise, as she was sure she would say something unkind. During the fandango, Francisca is the fastest whirler and the prettiest, happiest girl in the room. The next day, Tía Dolores shows her how to sew a patch so it barely shows. She is given a sewing diary with many designs; Francisca says that the dresses are quite elegant and that she wishes Tia Dolores would be there to help; she is afraid that she will sew a sleeve on upside down. She confesses to Tía Dolores that none of the girls know how to read. When Josefina is given her necklace, Francisca protests that the necklace is too grown up for her but silenced by Tía Dolores. She thinks that Clara's complement makes Tía Dolores sound boring, and prefers to say that she is elegant and graceful. She initially thinks that asking Tía Dolores to stay won't work, since she's used to a grand life in large cities. She says that she's not afraid to talk to Papá and that she'll walk right up and ask him to ask her--but this is quite improper, and Josefina suggests they all go. when Papá says he'll consider it, Francisca starts to protest but is hushed by Josefina. She wonders if Papá will ask and if Tía Dolores will stay, causing Clara to tell her she's being silly. In the morning she gets up and dressed quickly--which she normally doesn't do--and goes to the front gate. She is disappointed to see the trunk loaded up and assumes that Papá didn't ask.

Retrieved from "https://americangirl.fandom.com/wiki/Francisca_Montoya?oldid=73458"
Community content is available under CC-BY-SA unless otherwise noted.