In relation to Felicity's Central Series

After the events of Felicity Saves the Day

Felicity closes the back door and starts to sneak across the back porch on a December morning. It is a perfect, crisp day, and Felicity believes a ride on Penny would be the perfect start to the morning. Felicity jumps off the porch and starts to run towards the stables, thinking about how Penny will go faster than ever—and her thoughts are cut off by but a voice asking where she thinks she's going. Felicity is unhappy that she's been caught, and she turns around to see Rose standing at the door with her arms crossed. Rose reminds Felicity that her mother expects her to be a part of her breakfast party. Felicity frowns and tries to argue, but Rose remains firm and directs Felicity to change into some nicer clothes. Felicity sighs as she returns to the house.

Rose kindly says that while Felicity would rather ride her horse, her mother needs lots of help with the baby coming and being the eldest sister is a responsibility Felicity can't run away from. She tries to cheer up Felicity by saying she made a tart for her breakfast, but Felicity isn't cheered up; she is quite tired of being inside and feels like she has been cooped up all December. Mother is pregnant and has needed Felicity's help around the house since she can't move much; primarily, Felicity has had to take care of Nan and William when she is resting and this leaves Felicity very little time to play outdoors. She also has had to help when holiday callers come visiting, and she's tired of hearing about births, deaths, and marriages. As she gets dressed in her petticoat and jacket, Felicity thinks sourly about how much work the new baby has caused her already and that all this work has made the winter dull. There will be even more work when the baby is actually born, and she wishes she wasn't the oldest sister.

Felicity isn't in good spirits as she goes downstairs, and she feels even worse when she sees that their breakfast guest is Mrs. Wentworth, who Felicity thinks is the most talkative woman in all of Virginia. Nan and William are already at the table, and Felicity curtsies at the doorway. Mrs. Wentworth nods at her and continues talking to Martha. She tells Martha she needs a rest and should go to her father's plantation for a while; she herself is headed back home Thursday and invites the Merrimans to join her, and Mr. Merriman can follow them later. Felicity loves the idea and asks if they could go—partially because Grandfather's plantation has plenty of servants[2] that can help Mother and look after Nan and William which will leave her with plenty of free time.

Before Mother can answer, Rose rattled the plates she is holding, causing her and Felicity to look at her. Rose says nothing, but has a look of disapproval. Mother explains to Mrs. Wentworth that for days, Rose has cautioned her that the baby is due sooner than is expected and that Rose thinks she shouldn't go far from home; when prompted, Rose is firm on this. Felicity is quickly angry at Rose and then happy when Mrs. Wentworth adds that the midwife believes the baby isn't coming soon—and that she doubts Rose knows as much about babies as the midwife. Martha says that Rose had been with her since before Felicity's birth and she knew a great deal about babies. Mother starts to say something else when Felicity (unable to contain herself further) says please, they must go as it's been a dull winter and it's the last chance for fun—trailing off that it's the last chance before the baby arrives. Martha smiles indulgently and that they'll go, as she has felt guilty somewhat that Felicity has had no time to herself and will have even less once the baby is born, and they could all use a change. Rose sighs as the children cheer, and Mrs. Wentworth says that they'll take her carriage bright and early Thursday morning.

Thursday morning is neither bright nor early when the carriage arrives; it is a rainy afternoon. The luggage is loaded quickly and Rose sets her own bag under the seat next to the driver where she'll be riding. The others get into the carriage and they head off. The air is stuffy, and Nan and William are soon both asleep. Mrs. Wentworth talks on and on, with only small interjections from Martha. Mrs. Wentworth keeps jabbing Felicity with her elbow when the carriage bounces. Felicity is impatient to get to the plantation and looks out the window at the dreary view. The muddy road leads past black trees, empty fields, and gray stone walls.

About ten miles outside of Williamsburg just past an abandoned house, the road dips into a gully with a stream from the rain. The carriage drives into the gully and the wheels slip on the bank, causing the carriage to lurch to a stop and jostle everyone. Nan and William cry out in fright as Mrs. Wentworth calls out for Caleb to help them. Felicity hears a crack and looks down to see that the floor of the carriage has split, letting water seep inside. The carriage is tilting so far to one side that it feels as if it could topple into the water.

Felicity wants to cry out that she's scared too, but she looks at her sibling's faces and,--feeling sorry for them--realizes that they are too scared to move, so she has to go first and act braver than she feels. Felicity pushes herself out the door, landing in the icy cold water and almost falling to her knees. Once she has her footing, she turns to the carriage and holds out her arms to tell William that she'll catch him. He slides into her arms and she holds him close. Felicity then turns to Nana and says it's her turn and not to be afraid---the water is only to Felicity's ankles, and so isn't so deep. Nan inches her way out and wails that the water is cold when she steps in. Felicity agrees and urges her siblings to hurry out of the water. Nan makes her way up and Felicity follows carrying William.

Caleb leads everyone to the deserted house near by; it is cold and dark, but dry. Caleb starts a fire once they're inside and everyone crowds around it. Martha looks pale. Mrs. Wentworth orders Caleb to walk to Williamsburg and get help while they wait in the house and to make haste, as the wet clothes are making her uncomfortable. He says he'll be back as soon as he can and leaves. Rose adds some logs to the fire and Felicity takes her cloak off to dry. Moments later, Martha gasps and holds her side, and Rose rushes to her; Martha says that she thinks the baby is coming. Felicity worries while Mrs. Wentworth says that it's nonsense as she twists water out of her petticoats. Martha goes quiet, and then gasps again and bites her lip. Mrs. Wentworth, looking alarmed, says that Martha must be sensible and mustn't have the baby now. Rose replies back that babies don't wait as she helps Martha to her feet, and they must get ready to do all they can. Mrs. Wentworth says she knows nothing about babies but goes with them into the next room.

Felicity, trembling with fear, thinks that it's all her fault for begging to go to the plantation and that Mother and the baby are in danger from it. Before she can continue her thoughts William takes Felicity's hand and asks if Mother is having her baby, his face white. Felicity recalls Rose telling her that being the eldest sister is a responsibility she can't run away from. She takes a shaky breath, squeezes her brother's hand, and tells him not to worry because Rose will take care of Mother and she will take care of him and Nan; she says that they will all be fine, as she silently hopes that this is true.

Felicity helps Nan and William make themselves comfortable, helping them out of their stockings and shoes and rubbing their feet dry. She sings to them to keep them calm whenever Mother is heard moaning or crying out in pain. Soon, it's quiet from the other room. William and Nan fall asleep, but Felicity is too scared to sleep. She tries to listen to the noises in the other room, but there aren't any. Felicity is still wide awake when Rose opens the door and motions Felicity to come over. When Felicity arrives, she asks her to retrieve the bag under Rose's seat at the front of the carriage. It has things that will help Martha, and she needs Felicity to fetch it. Felicity, without hesitation, says she'll go. Rose calls her brave and urges her to hurry. Felicity makes her way quickly through the rain and over the slick ground to the gully; the bank is so slick she slides down on her bottom. She wades through the water to the carriage and gets Rose's bag, which is wet but otherwise unharmed. Felicity carries it close to her chest with both hands and back through the dark and the deserted house. Rose is waiting just inside the door and takes the bag before going back to the other room. Martha cries out; Felicity can hear Rose and Mrs. Wentworth soothing and encouraging her.

Felicity then hears a tiny mew (like a kitten) that slowly becomes a loud, strong wail--it's the new baby. She creeps to the other room, which is only lit by a single candle. Mrs. Merriman, lying on a makeshift bed, smiles and tells Felicity to come see her new sister. Felicity's legs feel weak as she walks over and kneels by her mother's side, before looking at the face in the bundle Rose is holding. She suddenly feels pride and love at her new baby sister. Mrs. Wentworth puts a hand on Felicity's shoulder and admits shakily that she was an old fool—but not foolish enough that she couldn't admit her being wrong and that Rose did know more than the midwife. She wouldn't have been able to help the baby be born without Rose's help. She thanks God that Rose was there. Rose thanks Mrs. Wentworth, then smiles at Felicity and says that everyone has to help any way they can when a baby arrives. Felicity smiles with pride.

Rose carefully hands the baby over to Felicity, commenting that she was almost born in a stream like a pollywog. Felicity suggests they name the new baby 'Polly,' short for polliwog. Mrs. Merriman agrees to the name, saying that this way they would never forget the night she was born. Felicity looks at Polly's face and exclaims that she will never forget the night that she became a sister all over again.

Valerie recalls her and her sister's excitement at the birth of her younger brother, Granger. He was born before Christmas and she feels that he was the best gift any of them could have imagined and she and her sisters were all pleased to become a sister again.

Discusses birth and infancy during Colonial times. Topics include: 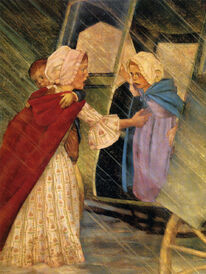 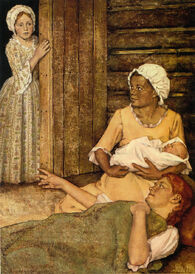