A face mold is a fandom term (later made official) that describes the particular cranial and facial characteristics of a doll.

Variations in eye color, hair colors and styles, and skin tone result in several different unique dolls in the 18" dolls. There are ten different molds that have been released; only eight are currently in use as of 2020. The first mold used is referred to as the Classic Mold, and subsequent molds are generally referred to by the first doll to use the mold.[1]

American Girl does not give a racial designation to any of the face molds and generally, any mold could theoretically be available with any skin, hair, and eye combination (as seen in the Create Your Own line). However, the faces do generally map to the general likenesses of perceived racial groups.

The face molds that have been used by American Girl altogether for the 18" dolls:

With the release of Boy Dolls in 2018, four face molds were slightly modified to take on what are seen as stereotypical "male" features: the Classic, Addy, Jess, and Sonali Molds.

This involved shaping the mouth closed and additional thickness added along the face molds' cheeks and jawlines, changing the profile of the lower jaw and elongating the face. The boy dolls are also given shorter hairstyles and painted with thicker width eyebrows. 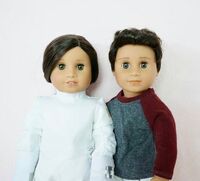 Comparison between #62 and 76, showing the face shape differences. 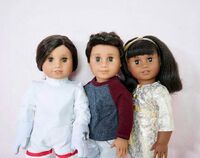 Comparison of the prior three from the side.
Add a photo to this gallery

The Bitty Baby dolls originally appeared to have four face (and head) molds; originally the Brown, Blond, and Red haired Bitty Babies shared face molds. Because the hair is molded to the head instead of wigged--and thus an integral part of the doll's look--a new Bitty Baby cannot be added to the line as easily, though they can be tinted for hair color. All face molds were slightly changed with the 2013 rebranding, but no new face molds were added.

The Bitty Twins appear to have only a few face molds, based on an open mouth and a closed mouth variation. The faces are slightly different for the "Asian", "Latino", and "African" Bitty Twins. Since the dolls are wigged, variations are easier than with Bitty Babies.

The Wellie Wishers have three face molds so far:

Retrieved from "https://americangirl.fandom.com/wiki/Face_Mold?oldid=90045"
Community content is available under CC-BY-SA unless otherwise noted.