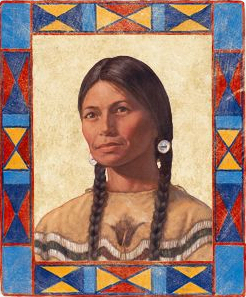 Kaya's mother is a good worker, and she often gets leadership positions, such as being the head of the berry-picking. She is very supportive of her husband, as she supports his skill with horses when discussing the use of horses with Aalah. Eetsa gives good advice, but she is also a good listener.

Eetsa helps the rest of the women pick berries. When Kautsa wakes up the teepee, saying the dogs were growling, Eetsa is the one to peek outside the tent and warn that enemies were in the camp. She picks up one of the twins and instructs the family to follow her into the woods for safety.

Eetsa is seen working on completing a large twined storage bag, one of the many gifts intended their visiting friends and family. When Kautsa talks about how sad it was Swan Circling didn't have any children, Eetsa breaks in and reminds her that she and Claw Necklace were still young and still had plenty of time to have children. Eetsa then asks Kaya to fetch some more water for their meal.

After the women finish assembling the winter lodge, Swan Circling joins Eetsa and Running Alone with the cooking. Eetsa points out to Swan Circling that she always seemed to be thinking about the future, often saying 'someday this' or 'someday that', and it is noted that Swan Circling and Eetsa were good friends. Eetsa is later seen with the rest of her family at the New Year Gathering.

When Kaya wakes up early the day after Swan Circling's disappearance, Kaya spots Eetsa leaving the lodge with a few others to get news from the search party. As Eetsa had been a close friend of Swan Circling, she is the one in charge of giving away her belongings.

After Kaya receives Swan Circling's name, she turns to Eetsa to admit her concern that she wasn't able to tell the truth to her namesake. Eetsa assures Kaya there was nothing to be worried about, revealing that Swan Circling had told her how she knew about Kaya's mistakes, but wasn't bothered by it and admired the strength and wisdom it took to leave her sister behind. Eetsa assures Kaya that Swan Circling had confidence that she would grow to be trustworthy and strong, and agrees with her sentiment that Kaya had a generous heart. Eetsa tells her that while it wasn't time to use her name yet, she'll know when the time comes.

Retrieved from "https://americangirl.fandom.com/wiki/Eetsa?oldid=80703"
Community content is available under CC-BY-SA unless otherwise noted.