Dress Like Your Doll is the fandom and later official term from American Girl for doll outfits and accessories that have a matching child- or (infrequently) adult-sized outfit or accessory. This encourages targeted purchasers to seek complementing outfits and items.

At launch, child sized nightgowns for Samantha, Molly and Kirsten were available in order to match the doll in sizes 6-12. Around 1988, Pleasant Company released more child-sized replicas of other outfits and the collection was referred to as The American Girls Wardrobe. As new Historical characters were released, matching outfits were released; the size range became roughly Girls' 7 to 16X. Accessories also included stockings, petticoats, hats and headwear, jewelry, specialty shoes or boots, underwear both historical and semi-modern, and other accessories.

Samantha Parkington, Felicity Merriman, and Kirsten Larson received clothing that resembled each of their Central Series book outfits as well as sleepwear. Since Molly McIntire's summer book outfit was a camp uniform, the Tap Dance Costume was released instead. Felicity's dresses were generally shortened to ankle length, as was Kirsten's Saint Lucia Gown. Child-sized patterns were briefly available as well for select items for Kirsten, Samantha, Felicity, and one of Molly's sets.

Directly matching items were phased out for the most part in the late 1990s and early 2000s. A re-release of Kit's Meet Outfit was offered after the release of her movie, as well as a coat based on Samantha's Holiday Coat from the movie.

Prior to the BeForever launch, the only outfits that were still available and directly imitated Historical outfits were nightgowns, robes, or pajamas for the available characters.

With the launch of BeForever, outfits inspired by--but not precisely resembling--the currently available Historical characters' meet outfits were released, as well as Samantha's redesigned nightgown. These outfits were designed more as modern reinterpretations or variations on meet outfits. For example, Caroline's outfit was interpreted into a white shirt with a ribbon like her waistband, pink jeggings to match the color of her dress, and a peacoat with nautical accents to allude to her love of sailing. Outfits based on limited edition outfits and revamped sleepwear for all the BeForever characters were also made available.[2] Items continued to be released based on character outfits, including shirts and jackets, until the end of BeForever.

There are currently few Historical Dress Like Your Doll items. As of 2022 the only actively available ones are all pajamas; they are child-sized versions of Rebecca's Nightgown, Julie's Pajamas and Robe (pajamas only), and Courtney's Care Bear Pajamas.

The modern line frequently releases matching outfits to some of the offered clothes in Girls' sizes 6 to 16. Outfits have been offered since the start of the line and generally focus on casual wear, beachwear, sleepwear, some costumes, and special occasion clothing. They are generally sold in separate components and, while tights are or were often offered, most generalized hair decorations are not, and no shoes other than bedroom/night slippers.

Early in the line, outfits were sold under the label AG Gear. Items both matched doll's outfits available and items uniquely designed for the line, such as suitcases. Some items were available in a wider variety than dolls' items; for example the two versions of the Slumber Shirt for children was available in additional gold and purple colors. Items in the AG Gear line often included ten free Grin Pins as a bonus unless they could not be packaged. Items were also released to match Miss AG Bear clothing.

Starting with the Holiday Dreams Pajamas in 2018, holiday pajamas became available in adult sizes as well briefly. The LoveShackFancy collaboration includes unique branded adult sized outfits to match the doll and children's clothing; they are, however, only available through LoveShackFancy.

Bitty Baby and Bitty Twins frequently releases matching outfits for children in sizes from Young Girls' 3 to 7. They are generally modified to be less infantile (e.g. turning the design of an infant sleeper into a pajama top and pants). Outfits styled after Bitty Twin boy outfits were never released.

With Our New Baby, some of the clothes designed for the dolls were offered in infant sizes for young babies.

Girls of the Year, Contemporary Characters, and World by Us

Starting with Kailey's Wet Suit and Bikini, one or two outfits have been available from each Girl of the Year's collection, and this was continued with the release of Contemporary Characters. This is generally the meet outfit (modified if needed), sleepwear, purses or bags, and another outfit.[3] This does not have to be the whole outfit e.g. only the shirt from Nicki's Ranch Outfit was offered, only the sweater from Saige's Sweater Outfit, and a modified apron based on Grace's Baking Outfit. Starting with Joss Kendrick, items became limited to bags, pajamas, and her meet hoodie. Kira Bailey only has her pajamas without slippers; her bag is instead a reusable tote.

A shirt based on Suzie Yang from the Z.Crew was released, the Z.Crew Tee Shirt, before the character was released as a doll. Outfits resembling or inspired by the meet outfits of the first three characters of the World by Us collection were also released.

Matching outfits for children was made available with the line's debut, similar to the outfits worn as meet outfits for the dolls. The boots were modified into socks sold as a five-pair set, the WellieWishers Sock Set; a pair of see-through wellies, the Peek-A-Boo Wellies, were sold alongside. Outfits and items continue to be made for the line, including unique items. 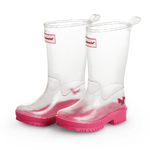 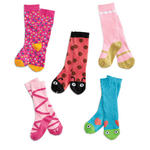 American Girl Place exclusive items such as shirts and hats are often available in children' sizes.

There are also occasionally outfits, accessories, and items released for children that are not associated with any doll's clothing or accessories.