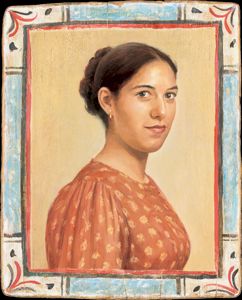 Dolores Romero is the aunt of Josefina Montoya. Josefina refers to her as "Tía Dolores."

Dolores Romero is a tall woman with dark red hair, slightly tanned skin, and grey eyes. She does not look like her sister, Mamá; her hands are bigger and her face is more narrow, and she has a deeper voice that is low and clear like a harp. However, she has the same laugh. She greatly misses her sister.

Dolores moved away from the rancho and to Mexico City ten years before the start of the series to care for her aunt; at her aunt's death, she chose to come back to Santa Fe. She received letters from Mamá and learned a lot about her nieces from the correspondence; she had not seen or met Josefina before she returned from Mexico City. She sent Mamá seeds from Mexico City which were brought on the caravan. She is more educated than her sister was, including knowing how to read and write. Her father says that she is quite stubborn--perhaps the most stubborn woman in the world. She is several years younger than her sister (and closer in age to her niece Ana, which makes them much more like friends than aunt and niece[1])and wanted to be like her growing up. Once, she took her sister's best sash without permission and lost it, angering her sister so much she wouldn't speak to her for days. She misses her sister deeply.

Tia Dolores is a good listener, and willing to help the four sisters learn, but she never does the work for them. Tia Dolores never wastes time. Unlike her sister, she doesn't mind taking over a weaving business, something the patron usually does in the home. Also unlike her sister, she helps Josefina face her fears rather than protect her from them.

Dolores is mentioned before she is seen; Francisca dreams of moving to Mexico City and living with her, sure she lives in a grand house and knows many elegant people. She claims to remember her aunt as she was almost six when she left. Clara mocks that if Dolores remembers her, she will not want to live with Francisca. She is also mentioned regarding the flower garden in the back courtyard; she sent the seeds to Mamá from Mexico City on the caravan and from those Mamá cultivated a lovely flower garden that Josefina now tends.

Dolores is first seen but not recognized by Francisca; she wonders who the tall woman is next to their grandfather, but Clara and Josefina have already left. When the girls go out to greet their grandfather, he introduces her as their aunt, shocking them all. She greets each other girls in turn, dwelling especially long on Josefina as Josefina was born after she left. She had not known she was coming up from Mexico City originally, but as her aunt had died and the caravan was soon to arrive, she chose to go home.

During Abuelito's story, he explains that Dolores insisted on bringing her piano. He had argued that it was too heavy and large to bring with them, but Dolores had not said anything. When they arrived at Dead Man's Canyon, they were overtaken by thieves. Her piano was knocked into a gully and the loud noise it made echoed off the walls, scaring the thieves away. Thus, her stubbornness saved them all. When Josefina asks if the piano is hurt, Tía says that only one leg is splintered and the top scratched. She asks Abuelito to give in to Josefina's request to see the piano and he does so she kisses him. Once Papá opens the crate, she climbs into the wagon and lifts the key lid. She can't stand up and there is not enough room for her hands to move, but she is able to play a chord and a spirited tune that mesmerizes Josefina. She stops, saying that the piano is out of tune and she is out of practice. She says the girls must come see her in Santa Fe, where she can play for them and teach them how to play.

During the fandango, Dolores is one of the most graceful dancers, catching Clara's attention. She stands out because of her height and red hair. When Josefina is crying after her flowers are destroyed, Dolores finds her and asks her what she is doing in the darkness. She listens quietly as Josefina tells what happened, giving her full attention. It is only when Josefina is done that she asks to see the flowers. She kneels in the dirt and touches the soil before saying that the roots are deep and the flowers will live. She asks Josefina about her love of flowers and says she has brought seeds from Mexico City, offering to help Josefina plant them the next day and wash her hair ribbon. She then escorts Josefina back to the gran sala. This is when Josefina gets the idea to ask her to stay.

After breakfast the following morning, Dolores spends the day with Josefina and her sisters. She helps fill water jugs to water the kitchen garden and pick some large pumpkins to take to Santa Fe. Dolores says that her mother does not have pumpkins this large in her garden. She praises Clara's dyed wool, saying there are no finer colors in all of Mexico. She teaches Clara a faster way to knit a heel and Francisca how to make a patch that hardly shows. She then helps Josefina with planting new flowers, but only for a while as she is going to help Ana bake bread later. She notes that Ana has a lot of responsibilities and struggles because she is young, but she has her sisters to help her. When Josefina discusses how things were easier with Mamá and how she must keep peace among Clara and Francisca, Dolores says blessed are the peacemakers as they will be called the children of God. She then says that she argued with her sister and that she is sure her sister thought she was a pest. She relates a story about how she took Mamá's best sash without permission and lost it, causing her sister not to talk to her for days. When Josefina says she'd like her to be there to protect the flowers, Dolores says she can protect them and doesn't need her as she will keep the flowers safe.

Dolores brings gifts for all the girls--a silk rebozo for Ana, a sewing diary for Francisca, scissors and needles for Clara, and a garnet necklace for Josefina, saying that Josefina is quite grown-up herself when Francisca protests the gift. She says that she picked the right gifts for them all thanks to Abuelito's stories during his yearly visit and the occasional dictated letter from Mamá, which made her feel like she was watching them grow up even though she was so far away. She is surprised to learn the girls don't know how to read. She and Abuelito go to the village to visit Mamá's grave, during which the sisters discuss asking her to stay through Papá.

The next morning, the girls initially believe that Dolores is not going to stay as her trunk is loaded onto Abuelito's wagon. It is when Josefina sees her piano in the gran sala that she realizes she is staying, and runs out to the gate where Dolores sweeps her into her arms. She is going to Santa Fe to see her Mama, but promises she will return, to stay as long as she is needed. She swings herself onto the wagon and leaves with her father.

Retrieved from "https://americangirl.fandom.com/wiki/Dolores_Romero?oldid=81268"
Community content is available under CC-BY-SA unless otherwise noted.