Coconut is a white Westie dog marketed as part of the modern line. She was released in 2000 (as a boy at the time), a mascot for the line (along with Licorice from 2003 to 2008), and retains mild prominence even after the purchasable pet was retired from the line in 2016.

2000: Coconut was released and marketed as a boy. He came with a wicker dog bed with a blue polkadot cushion lining, pretend dog biscuits and a rawhide chew toy for $16.

2001-2004: The next year, Coconut was remarketed as a girl, and sold with a removable collar and leash only. She had been modified to have a magnet near the location of her mouth so that items could be "held" by her. The price of $16 remained the same. This was also the first year dress up sets were released for Coconut.

2005-2008: Coconut was given another rerelease. This bundle included a new collar and leash, magnetic tennis ball toy, and a certificate. Cost went up to $19. Coconut was also available for purchase at bookstores. From at least 2005 until 2008, it was possible to purchase a bundle that included a Just Like You doll and Coconut as an add-on. This was discontinued with the release of the Star Hoodie Outfit.

2009: Coconut was rereleased with a new collar, a pet journal, no leash, and no magnet to hold items. Coconut's new collar is hot pink and orange, and the cost was increased to $22.

2010: The price of Coconut was lowered back down to $20 and pet journals were no longer bundled.

2014: Coconut was given a full redesign; she was given jointed limbs (including back legs) and head, no permanent collar, and the return of a magnet near the mouth area to hold items and a toy tennis bone. The American Girl star is embroidered on the back left foot. Price was raised to $28.

2016: Coconut was fully retired as a pet for dolls; however, the other modern style pets remained available. 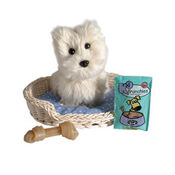 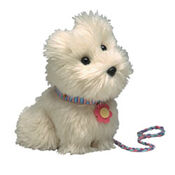 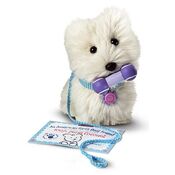 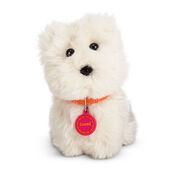 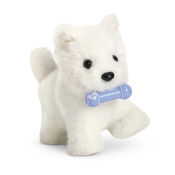 Coconut has had several accessory sets; these often include clothes and headgear to dress her in and play items. Many of these corresponded to various Just Like You outfits. The first line of dress-up sets were retired in 2009 and Coconut was treated more like a pet than a second character. In 2014, dress-up sets were made available again, and can work with all modern pets.

Coconut sometimes came bundled at various bookstores with the book Coconut's Guide to Life. This version was originally not sold with a magnet and only with the collar; later it came with the leash.

On Doll Clothing and Accessories

Coconut has had several modern outfits and accessories with her image. She is either prominent on a shirt or jacket or in the print of the fabric.

She has also been available in larger plush forms: