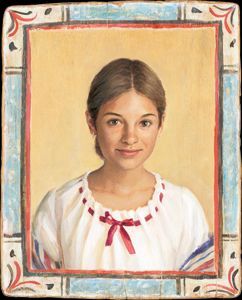 Clara Montoya is the older sister of Josefina Montoya.

Clara is twelve when first seen in Meet Josefina. She is described as careful, practical and sensible. She appears to have light brown hair, or at least lighter than her other sisters. She and Francisca consistently get in arguments with each other, most often over small things. She does enjoy fun things such as racing with Josefina. She and Francisca bicker more since their mother's death. She thinks that Francisca dwells too much on her appearance, but has moments of uncharacteristic caring herself. She has a very flat, no-nonsense manner. She is also talented in embroidery and is the best at doing colcha embroidery out of all her sisters.

Clara, like Josefina, is too young to be allowed to dance at parties at the start of the series. By Changes for Josefina, while still too young to dance at age 13, Clara is allowed to watch the other dancers in the gran sala. This implies that a girl has to be at least age 15[1] to dance.

Clara is first spoken about; she and Francisca are having a fight over who will carry the washing tub. Clara loses the fight; she is seen carrying the tub out. Josefina offers to help her carry the tub and then suggests that they race to the stream. The two take off with the tub, get off their moccasins, and get into the river and splash Francisca and Ana. She agrees with Francisca (a rare thing) about the evening primroses and suggests that Josefina take some for her memory box. She begins to argue with Francisca again when she goes on about Tía Dolores's life in Mexico City, pointing out that they hardly know her and that they have not seen her since she moved there ten years ago. When Francisca taunts that she was older and remembers her, Clara snaps back that if Tía Dolores remembers anything about Francisca, she won't want to live with her. She hopes that Abuelito has brought back a plow Papá needs; when Francisca calls her dull, she snaps back that Francisca thinks too much about how she looks and Josefina cuts them off before they can start squabbling again. They both agree that they would like chocolate, though. When the goat herd arrives, Clara points this out to Josefina as a surprise she won't like; when Florecita makes a beeline for Josefina, she tries to help shoo her off and suggests that Josefina throw a pebble at her. Josefina does not listen and ends up losing her primroses.

She is in the kitchen helping Ana prepare the meal for the fandango they are holding, peeling, chopping and stirring. When Josefina and Francisca run back in to say the caravan in on the way, she goes with them to the tower. She goes down the greet her grandfather at the front gate and is close behind Josefina to greet Abuelito. He kisses all his granddaughters and greets them by name. She is as shocked by the appearance of Tía Dolores as the other sisters. Tía Dolores says that Clara was barely three when she left and asks if she remembers back then. She goes to listen to the piano playing and thanks Tía Dolores for playing afterwards.

Before the fandango, Francisca ties her hair with one of the blue ribbons Abuelito has brought them. She unties and reties her sash and uncharacteristically asks if she looks all right. She beams and touches the ribbon when Francisca says she looks very pretty. She is too young to dance with the others and so sits outside the gran sala with Josefina. She says that Tía Dolores dances very well, and asks what is going on when Papá nods to Josefina to get her bouquet. She is already back inside by the time Josefina returns.

During the day with Tía Dolores, Tía Dolores praises her dyed wool and shows her a faster way to turn a heel in a knitted sock. Tía Dolores brings her a set of scissors and needles, which she likes for being both beautiful and useful. Clara says that Tía Dolores is sensible and hardworking, which is her highest praise. Clara is the one to point out, with no nonsense, that even is Tía Dolores is willing to stay that they can't ask her directly and must ask Papá to do so. She says she won't ask Papá and when she asks Josefina and Ana if they will do so, they both say no. When Josefina suggests they all go together, she doesn't move at first but finally comes with Josefina and Francisca. That night, she says that Francisca is silly to worry about if Tía Dolores will stay and they will find out in the morning. She is there and disappointed when Tía Dolores's trunk is loaded up, assuming that she simply does not want to stay there.

Clara is convinced that this year's Christmas won't be good without their Mama's help. She was supposed to have given Nina to Josefina last year, but she claims she forgot and doesn't know where she is. Clara is deeply upset when she finds that her Mama's altar cloth is ruined from the flood, and Josefina later sees Clara cry into Nina. Clara at first doesn't help with the cloth's repair, but as she later helps fix up her sister's stitches and joins in, she becomes happier. On Christmas Eve, Clara fixes up Nina, makes her a new dress, and gives her to Josefina. She admits that she did keep Nina to herself since she felt that was all she had of Mama. But she now knows she has her mother's ability for embroidery and she'll never lose that gift.

Clara still has some pessimistic tendencies, saying the fiesta might be cancelled due to the snow and teases Josefina playfully about her optimism. Although she is still too young to dance at the fiesta, she can now watch while sitting on the floor, giving her more appreciation for fiestas. Clara, also wanting Tia Dolores to stay, plans with her sister on how to keep Dolores from leaving.

Retrieved from "https://americangirl.fandom.com/wiki/Clara_Montoya?oldid=73459"
Community content is available under CC-BY-SA unless otherwise noted.