The Christmas Gown and Stomacher (also called Felicity's Holiday Gown) was introduced to Felicity's Collection in 1991 and retired in 2010 with Felicity's archival. It is associated with the book Felicity's Surprise. Retail cost was $22 and was later increased to $32.

Blue taffeta gown. Blue satin trim pleated down front and gathered at sleeves; lace on the sleeves and bodice. Snaps to the stomachers. Slits in sides of skirt.

Blue taffeta petticoat. Velcros at sides and is worn under the main gown.

Pink ribboned stomacher with one pearl in the center of each one (it consists of three pink ribbons on the stomacher). Snaps to bodice of gown.

Blue choker tied into a ribbon with attached pearl drop. Clasps in back with a twist clasp.

Blue satin hair ribbon. This was originally not included with the set; the ribbon was added in 1993.

White slip on shoes with attached blue bows. Originally, these were not sold with the dress.

White cloth pinner cap with lace trim and blue bow tacked at back. Has two thread loops at front and back to pin onto the hair.

Double-sided card with instructions on and history of using stomachers. 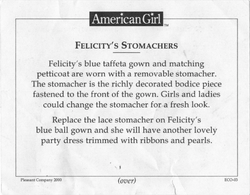 Front side of Mattel version of card. 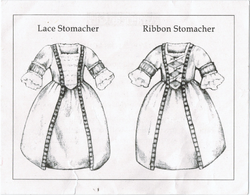 Back side of Mattel version of card.

The matching outfit was available as a one-piece gown called the Palace Blue Gown. Cost was initially $115 and decreased to $98. It was phased out around 2000.

The gown included a net petticoat, a pinner cap, and a blue silk cord necklace with faux pearl drop.