The last separate cover of Changes for Molly.

Changes for Molly is the sixth book in the Molly series. It is now included in Stars, Stripes and Surprises.

Only in Changes for Molly

Chapter One: Hurray For The U.S.A!

Molly and her friends Linda and Susan are waiting for the bus after their dance class. It is a cold, rainy March afternoon so they are waiting under the movie theater sign. They are talking about the Hurray for the U.S.A! show that their dance class is performing in. All the girls are going to try out for the part of Miss Victory, the soloist in their dance. Linda and Susan both agree that Molly will get it because she is the best dancer. There is only one problem, Molly’s hair is straight and it needs to be curly for the part of Miss Victory.

Chapter Four: The Show Must Go On

Looking Back: Changes For America

Discusses changes for America after the end of World War Two. Topics include:

Items associated with Changes for Molly 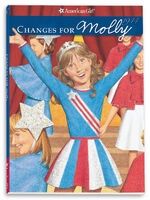