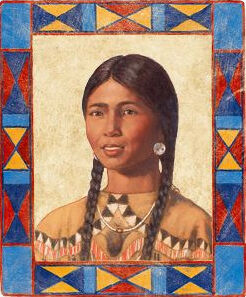 Brown Deer is the older sister of Kaya'aton'my.

Brown Deer is old enough for courtship. Earlier in the series she's interested in a young, handsome man named Cut Cheek. Later, she marries him. Brown Deer is a hard worker and is always awarded leadership positions, just like her mother. She's considered to be pretty.

When Kaya felt she was going to lose her sister to marriage, Brown Deer kindly assured Kaya that they would always be sisters.

Brown Deer helps the others with berry picking and when raiders invade, she grabs one of the twins as she ran into the woods for shelter.

Brown Deer helps the rest of the women fetch fire wood. Later in the day, Brown Deer works on making a necklace out of shells. She occasionally ran her fingers lovingly across the beads, and Kaya guesses she was making a necklace for Cut Cheek, who would be returning for the winter gatherings. Brown Deer is noted to have been dressing her hair with fragrant oil so it would grow long and silky.

Brown Deer is eager to hear the story of how Swan Circling became a warrior woman, and is as invested in Kautsa's story as Kaya is. Brown Deer agrees with Kautsa's sentiment that it was a sad thing that Swan Circling didn't have any children.

Brown Deer was helping Kaya and Kautsa get the camas cakes from the storage pit when the visitors for the New Year Gathering arrived. When Kaya spots Cut Cheek, she looks for Brown Deer, wondering if she would hurry to greet him. Kaya spots Brown Deer standing modestly by the doorway, blushing as if she knew Cut Cheek was looking her way. The two make eye contact and a spark seems to pass between them. Kaya smiled, thinking that someday soon Cut Cheek would wear the necklace she made.

When Swan Circling passes on and her belongings are given away, Brown Deer is given a pair of deerskin moccasins.

Community content is available under CC-BY-SA unless otherwise noted.