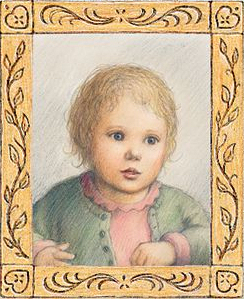 Britta Larson is the younger sister of Kirsten Larson.

Britta is born on May 25th. Since Kirsten's Mama is busy taking care of Britta and still weakened from giving birth, Kirsten stays home from school to help with the house.

Mama is described as carrying Britta during portions of the story, and Britta goes into town with the rest of the family for the 4th of July.

Britta stays at home with the kids while the adults go into town. Lisbeth's chores for the morning involve taking care of Britta and washing her diapers.

When Kirsten opens the door during the storm to let Caro in, Britta begins to cry due to the icy wind. Britta cried hard enough to being to hiccup, but Kirsten isn't able to comfort her and warm her up until the door is shut. When the kids make a plan to sleep in the bed by the fire, they plan to have Britta sleep in the bed with them. Kirsten and Lisbeth warn not to let Britta crawl out from under the blankets or roll on top of her.

The next morning, Kirsten finds that Britta is missing, and is worried she might have crawled down and got smothered by the heavy covers, but isn't able to find her. Lisbeth says that Britta couldn't have gotten too far, but Kirsten fears if she wasn't under the blankets she would have been frozen. Kirsten finds Britta sleeping under the bed, next to Caro, having been kept warm thanks to his fur.

Retrieved from "https://americangirl.fandom.com/wiki/Britta_Larson?oldid=81034"
Community content is available under CC-BY-SA unless otherwise noted.