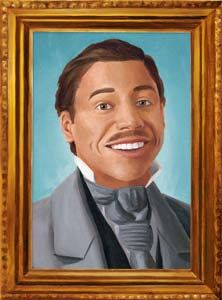 Armand Rey is the older brother of Cécile Rey.

At the start of the series, Armand has been studying in Paris for two years, learning to work in the family business as a stonemason. Armand secretly wished to be a painter and had a difficult time revealing this to his father. For much of the story, Cécile was the only person he shared his secret with. Armand considers Cécile to be trustworthy. Cécile has a close relationship with her brother, though often times she envies the attention he receives from their family and the freedom he's given. He often dances with her at Mardi Gras balls, where he once dressed as a knight. He's creative in many ways. He painted a portrait of Cécile and carved a doll to looked like her for her birthday. He's kind-hearted and jovial. He has a sense of humor and often teases Cécile. Cécile's friend Monette considers him to be very handsome, and Marie-Grace also thinks he is handsome. He has a dimpled smile.

In the story, he becomes a victim of yellow fever but eventually recovers from it.

Cécile misses Armand, who has been studying in Paris for two years. At the beginning of the book in January 1853, Cécile is struggling to write letters to her brother because she feels that she cannot express herself well. In contrast, Armand shares funny stories with her about his life in Paris. Armand will return the following August and it is expected that he will join their father and assist him in his stonework business. When it's announced that Armand will actually return in May, Maman fusses about his return and worries about which clothes to buy for him and which food to serve. Cécile starts to feel jealous about all of the attention. She snaps at Ellen when Ellen asks about him. Cécile reflects that Armand had "taught her how to draw, and play tag, and count in English and French. She didn't tell Ellen about the secrets they'd shared, like the time she was five and Armand had pretended that he, and not Cécile, had spilled Maman's ink on the rug upstairs." Cécile is clearly close to her brother. She also notes at one point that Armand had sent Maman "delicate lace gloves" the previous year.

When Cécile attends her Mardi Gras ball, she reflects on the last ball Armand attended, in which he wore a knight costume with paper armor. She also remembers that Armand always picked her for the first dance, and she worries that her brother will be too grown up to do such things now.

In May, Armand returns a week before her birthday, which makes his return date May 21, 1853. Cecile worries that Armand will no longer like snacks of gingersnaps and pain perdu for breakfast. Cécile also decides to embroider a white linen handkerchief with his initials, AJCR, in blue in one corner. As they approach the ship, Cécile defies her mother and runs unladylike to get there as the passengers disembark.

Armand is described as having "that touch of red in his hair, just like Cécile." When Cécile first sees him, he is described with "dark, thick hair like Maman" and hazel eyes like Cécile. He has a mustache and is tall and broad with dimples. Cécile notes that his voice has gotten deeper. She is relieved when Armand teases her and she realizes their relationship is the same as ever. She thinks, "This was like old times with her mischievous big brother, when they used to share secret jokes with each other."

After they say a prayer of thanks at the St. Louis Cathedral with their family, Armand sneaks out with Cécile and gives her a china doll that resembles her with "golden brown skin, brown porcelain curls highlighted by fine auburn lines, and hazel eyes." Armand tells her that he made the mold for this doll himself, and he shares a secret: he doesn't want to be a stonemason, but rather a painter or artist. Armand has not yet told Papa, and he asks Cécile to keep hsi secret.

Armand is enjoying his time back at home with his family in July 1853. He begins painting a portrait of Cécile as a secret gift for their mother, and he has not yet told either of his parents about his goal to become an artist. He enjoys spending time with family and friends at Lake Pontchartrain, and he comments that he missed particular foods that their mother and Mathilde would bake. In August, he faints one day when he is painting Cecile's portrait because he has contracted the yellow fever. Cécile sits by his side while he's sick, and she sings "Ave Maria" to him when he requests music. Armand recovers by the end of the book.

Retrieved from "https://americangirl.fandom.com/wiki/Armand_Rey?oldid=91667"
Community content is available under CC-BY-SA unless otherwise noted.