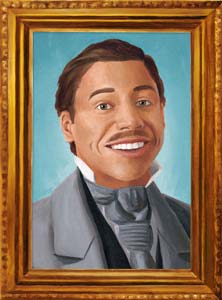 Armand Rey is the older brother of Cécile Rey.

At the start of the series, Armand has been studying in Paris for two years, learning to work in the family business as a stonemason. Armand secretly wished to be a painter and had a difficult time revealing this to his father. For much of the story, Cecile was the only person he shared his secret with. Armand considers Cecile to be trustworthy. Cecile has a close relationship with her brother, though often times she envies the attention he receives from their family and the freedom he's given. He often dances with her at Mardi Gras balls, where he is usually dressed as a knight. He's creative in many ways. He painted a portrait of Cecile and carved a doll to looked like her for her birthday. He's kind-hearted and jovial. He has a sense of humor and often teases Cecile. Cecile's friend Monette considers him to be very handsome. He has a dimpled smile.

In the story, he becomes a victim of Yellow Fever but eventually recovers from it.

Retrieved from "https://americangirl.fandom.com/wiki/Armand_Rey?oldid=73234"
Community content is available under CC-BY-SA unless otherwise noted.