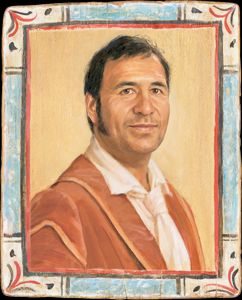 Andres Montoya is the father of Josefina Montoya; she refers to him as "Papá".

Andres is a tall man with thick eyebrows that make him look fierce, but kind eyes. He is very conservative with his words. He has become very quiet and does not laugh much; Josefina observes that this is due to his wife's death, not from sternness or anger. He is quiet like Josefina, but full of ideas and more open around his family. He does not have as easy a manner as his wife did. He likes music as much as Josefina does. He has an older sister who lives in the village near the rancho. He is the patrón--the head of the rancho and the family.

Papá is only seen briefly at first and from a distance when Josefina sees him on horseback speaking to the workers in the cornfield near the stream. He catches Josefina's attention while she is watering Mamá's flowers; he says that he is glad that Josefina remembers to water her mama's flowers to catch her attention. He continues that things grew well under her care. Josefina agrees and says she liked flowers. Papá notes that Florecita likes them too, and Josefina blushes. Papá tells her that she will stand up to Florecita once she is ready, then takes a drink from the water gourd, pours the remaining drops on the flower garden, and returns to the fields. When the caravan approaches, he rides out to meet Abuelito and the woman with him, Tía Dolores (the sisters do not recognize her). He is very surprised to see her. When the sisters are shocked at meeting Tía Dolores, he and Abuelito laugh at them before he says they are as surprised as he was and welcomes her to their home. After the tales of chasing off the thieves, Papá congratulates her for bringing the piano that scared them off. Josefina asks to see the piano and when Abuelito denies her, he clears his throat and says that the family has never seen a piano and asks to open the crate; he would be willing to seal the crate back up afterwards. He is as mesmerized by the music as Josefina. After sealing up the crate, he asks her about it. He says that he enjoyed it too but they will have fiddle music at the fandango. He then tells her to get ready.

During the fandango, Papá runs into Josefina with her bouquet and, after asking her what she has, suggests that she present the bouquet during the fandango after he formally introduces Tía Dolores to their friends and neighbors. He finds Tía Dolores and Josefina after the bouquet has been ruined, saying that he looked for her but couldn't find her. When he hears what happened, he asks if Florecita is still out and is surprised that Josefina was the one to put her back in her pen as she is scared of her. He says that we never know where courage will come from, and is sorry about the flowers. He then says they should come in and eat, as Ana has made a lot of food for them to enjoy.

After the sisters discuss the idea of Tía Dolores staying, and that they need to discuss it with their father, they find him near the pens fixing the latch. He notes that the goats won't get out of the pen anymore. When Josefina asks for him to ask Tía Dolores to stay and help them, he has a look of sadness when Mamá is mentioned before saying that he'll consider it without another word. He is not seen again in the story, but clearly asked Tía Dolores as she has chosen to stay.

Retrieved from "https://americangirl.fandom.com/wiki/Andres_Montoya?oldid=73654"
Community content is available under CC-BY-SA unless otherwise noted.