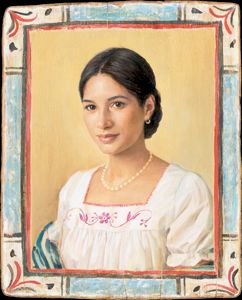 Ana Montoya is the oldest sister of Josefina Montoya.

Ana Montoya is twenty years old at the start of the series. She is married to a man named Tomás and has two young boys, Antonio and Juan; the family continues to live on the family rancho, as extended families were common at the time.

Ana gets along with Josefina quite well; she is maternal towards her and worries more after the death of her mother. She has taken on a lot of responsibilities as the oldest woman of the rancho after her mother's death and this keeps her busy. She is also quite soft hearted and can't stop Clara and Francisca's arguments as they don't mind her. She is very concerned about her sons.

Ana is first seen when she comes out of the house at the rancho. She says Josefina looks like a little bird with her hopping and singing. When Josefina asks where Francisca and Clara are, Ana says that they are fighting over who will carry the washing tub. She is forced to run after Clara and Josefina take off running to the stream; when she and Francisca arrive and are splashed, she scolds gently that they are there to wash the clothes in the baskets, not the ones that are on them. She agrees that it is a good day to wash and that Mamá would say God has sent a good drying day and that Monday is laundry day even in Heaven. When Josefina crosses the log to get her primroses, she warns her to be careful. Josefina teases her by pretending to lose her balance on the way back, and Ana, knowing she is fooling, says that Josefina is shy and sweet in company but playful with her sisters and Josefina teases the life out of her and will make her old before her time--sounding like Abuelito. Ana hopes their grandfather will bring her shoes for Antonio and Juan and asks Josefina what she wants, thinking she would like a surprise. When the goat heard approaches, Ana tries to tell Josefina not to dislike the goats as the herd belongs to the sisters. When Florecita goes straight for Josefina, she tries to shoo her off and suggests that Josefina splash her to get her to go away; when Josefina falls over into the water, she helps her to her feet, asking if she's okay and saying Josefina shouldn't let Florecita bully her.

Ana is working in the kitchen later to prepare for the fandango as the caravan is due that day; this is her first time handling the preparations, and she is very overwhelmed even with help from Carmen. Her hair is frizzled by the head and her face is red; she has to use the back of her wrist to wipe the sweat away from her brow. She sends Josefina to get her some onions from the kitchen garden. When Josefina comes back to say that Papá and Abuelito are on their way to the house, She is close behind Josefina to greet Abuelito, and he kisses all his granddaughters and greets them by name. She is very shocked to see Tía Dolores and Tía Dolores says she is very like her Mamá. She is the first to speak up, offering her aunt and grandfather to come inside and have a drink, apologizing that there has not been a place put aside for Dolores. She goes to listen to the piano playing and thanks Tía Dolores for playing afterwards. Before the fandango she is heard greeting women along with Carmen, and she takes time off from her responsibility to dance with her husband Tomás.

The next day Tía Dolores helps her bake bread. She receives a silk rebozo that she loves, and asks how her aunt knew the perfect gifts to get her, and apologizes that the sisters did not get her gifts. She says that Tía Dolores was a large help and so kind to her little boys. She thinks Tía Dolores won't stay because she has come back to get married and start her own family. When Clara asks her if she will ask Papá to ask Tía Dolores to stay, she say she won't as she might look to be complaining and that asking for her help might mean that she doesn't want to do what's her responsibility. When Josefina suggests they all go together, she doesn't move at first but finally comes with Josefina and Francisca. She is there and disappointed when Tía Dolores's trunk is loaded up, assuming that Papá asked but she said no.

Retrieved from "https://americangirl.fandom.com/wiki/Ana_Montoya?oldid=84098"
Community content is available under CC-BY-SA unless otherwise noted.