The BeForever cover of A Growing Suspicion.
Rebecca's Series

In relation to Rebecca's Series

After the events of The Showstopper

A Growing Suspicion is a Historical Character Mystery that is part of Rebecca's books.

Chapter One: A Backyard Mystery

Chapter Seven: A Discovery in the Woods

Chapter Eight: The Sprite in the Garden

Chapter Nine: A Key and a Clue

Discusses urban gardening and the Brooklyn Botanic Garden during the 1910s. Topics covered: 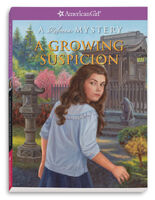 Retrieved from "https://americangirl.fandom.com/wiki/A_Growing_Suspicion?oldid=84160"
Community content is available under CC-BY-SA unless otherwise noted.